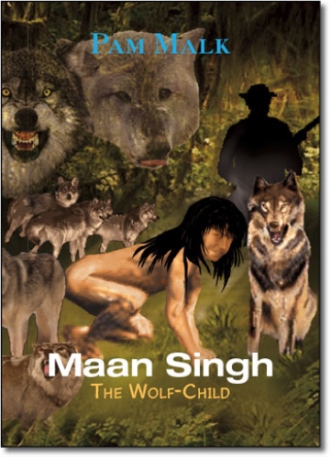 Maan Singh was a young boy who was abducted as an infant and raised by wolves for about 5 years. This book tells the story of this child as he was "rescued" from the wolves by my father, Harris Fulton David, and brought back to civilization. He walked on his four, like the wolves. He howled at the moon. He ate like an animal. He wore no clothes. He was a Wolf-Child.

Pam comes from a family of ten children. She grew up in a very loving close-knit and kind home with doting parents. She was very creative from the beginning. She did not pay much mind to studies, although she was educated in the best Catholic schools in town. She was taught by the Catholic and Irish nuns.

She always wanted to write. During her early years of school, she wrote short stories for the local radio station. Her father, an ardent storyteller, always had fascinating stories to tell them at bedtime. She remembers quite a few of them.

The one that surfaced in her mind and continued to haunt her was the story of Maan Singh, the wolf-child. It is a true story of at time gone by, which lay dormant for many years. She finally brought it back to life again.

Pam spent several years as an International Air Hostess. She is no stranger to the entertainment industry. She has written radio plays and has performed on stage and TV, in various dramatic and comedic roles. She has produced a cable TV talk and interview show as well as a Telly Award winning comedy series. She has done a principle role in a major TV series, "The Prosecutors". She was Dr. Farouk in the episode "Young Love". She has also been an extra in several Major Motion Pictures.

She lives in Virginia with her son Michael and her husband John.