A Vision Of Wings 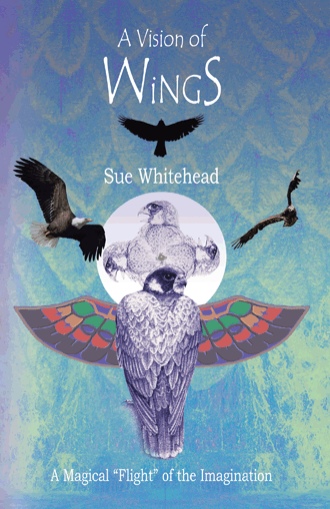 When Sara opened the cardboard box left at her front door, she had no idea what affect the Peregrine Falcon it contained, was to have on her life. She had cared for many birds in the Wild Bird Hospital she ran in Mid Wales, but none had affected her in this strange way, none had been so close.

Taking her courage in her hands, she contacts ex-lover, Gabriel, who helped her heal the birds when they were together with great skill. He doesn't have an answer for her, but she knows the falcon, Mistral, wants something of her and the journey it leads her on takes her across the sea to British Columbia, led on by the dreams.

On the way she makes new friends, also affected by the birds - amongst them a Haida Indian, who holds the key to the mystery. Through danger and hardship, she eventually finds the answer and her life is changed forever.

Sue Edwards (nee Whitehead) was born in Shropshire, United Kingdom and moved to the beautiful Mid Wales countryside twenty-five years ago, where she earned her living making gold and silver jewellery, inspired by the natural beauty around her. During this time she cared for various injured birds, but it wasn't until she married her husband, Roger, that she was able to set up the Mid Wales Bird Hospital where over a hundred birds a year were cared for.

After ten years, the pressure of running a shop, Gallery and a picture framing business as well as helping Roger with his wholesale business meant that they had to give up the work in the Hospital. Sue's love for the birds did not diminish, though, and she continued to draw and paint them and then write a novel with them as central characters - A Vision of Wings, where she hopes to share and inspire others with that love.