Chicken Fluff and Other Stuff 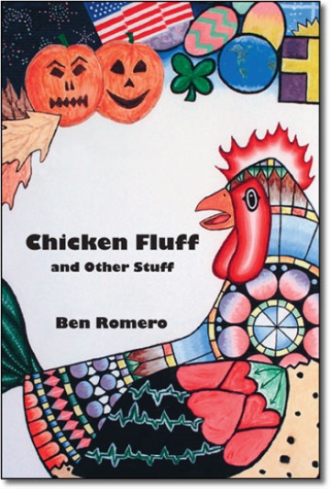 Chicken Fluff and Other Stuff is a collection of true short stories that explore the human condition centered on holiday humor. The book includes seventy stories by thirty-three authors of all ages and varied walks of life. What makes them enjoyable is the fun and nostalgia to which we can relate. Whatever your pleasure, this collection of holiday short stories is sure to please you.

Linda Robert's story, Swimmin' in the Septic Tank, tells a bittersweet teenage holiday experience. Grump in the Tree, by Leeann Meeker relates a story of a child reluctantly entering the awkward stage of adolescence. Linda Hayward's, The Migraine Cake and It's a Marshmallow Christmas tell about humorous holiday food adventures. For the unusual, examine Hitoshi Yamada's The Slant-eyed Santa Claus and Fern Montoya Giron's The Egg. From a purely innocent childhood point of view, experience Melissa Lopez's That Time in the Snow and Ben Romero's Special Day in Nambé and In the Name of Science. If Halloween is your favorite holiday, you must read Dave Creighton's It was a Dark and Scary Halloween Night. Other holidays found in the collection include Grandparent's Day, Martin Luther King's birthday, Labor Day, New Year's Day, Valentine's Day, Groundhog Day, Dia de Los Muertos, and Cinco de Mayo.

Ben Romero was born and raised in Northern New Mexico, the fifth of seven children in a Hispanic, Catholic household. Romero is a part-time Adult Education teacher in an ESL program (English as a Second Language), and uses some of his writings as material for teaching.

He has spent the past thirty-two years working for the US Postal Service and serves as Customer Relations Coordinator for the Central San Joaquin Valley. He received a Bachelor of Arts Degree in Management with a minor in Spanish from Fresno Pacific University in 1995.

Romero is a member of the Central California Hispanic Chamber of Commerce and is married to Evelyn Romero, his wife of thirty-six years. They have five children and four grandchildren, with two more on the way.

Numerous contributors of fine down-to-earth stories that are both wholesome and entertaining make Romero's anthologies possible.