For Life is a Journey 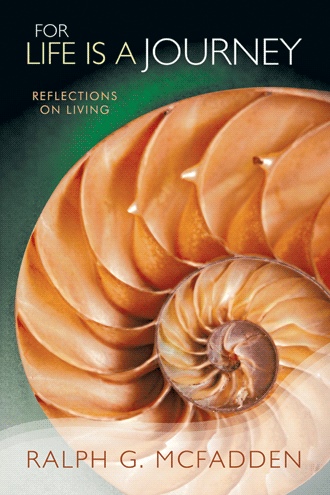 In his book “How, Then, Shall We Live?” Wayne Muller quotes a woman who was taught by her family that she ought to be ashamed because she was not white. She said, “If we feel ashamed of who we are, we will pretend to be someone else. In the process of trying to satisfy these demands, to be someone else, we do great harm to our natural sense of self. When we struggle to create a new persona that is less offensive and more pleasing, acting the way they want us to be, just to feel safe, acting this way over and over and over, each day, year after year - in time we begin to forget who we are.” In 1969 I “came out” as a gay man to Barbara, my wife. I do not think that I had expected, as I ventured into this new area of my life, “coming out,” that I would experience such grief and loss. Perhaps I thought that it would change my life. But what was unexpected was how much it would change my very being. My father and mother taught me about compassion, peace, reconciliation and justice. We had Japanese Americans in our home in the early 40's when it was very unpopular. The church in Troy, Ohio, where Dad was pastor was one of the first in the Church of the Brethren to have a “Negro” family as members. My father was on the cutting edge of open housing in Elgin, Illinois, in the early 50's when he was pastor there. I learned something of working on justice and reconciliation when I sat on the Mayor’s Human Relations Council in Lafayette, when I worked in Washington, DC with other denominational judicatory executives on the Poor People’s campaign and the race riots, when I lobbied for our congregation to become a sanctuary for Central American refugees, when I was on the international board of the Brethren Mennonite Council for Lesbian, Gay, Bisexual, and Transgender Interests, and when, as a church executive, I tried to bridge the gap between the evangelicals, fundamentalists, feminists, gays/lesbians and the denominational headquarters. I especially learned something about integrity, openness, compassion, reconciliation, and justice when I decided to come out as a gay man to my family, friends, and to the church. In time, I came to realize that even an historical peace church can be deeply mired in self-preservation, and can be very cautious about taking a stand on controversial issues. It may grieve its inability to face up to and take action with these issues that some know to be concerns of justice - but the church, for the most part, remains hostile and inhospitable to the journey of gays and lesbians, and to sexual orientation as a justice issue. For my friends in the church who claim to understand and to love me and others who are lgbt, the reality is often that economics, church unity and church politics speak louder than the need for truth, justice, reconciliation. For me, the church has caused horrendous grief, pain and loss. I ask, “Where is the courage? Where is the vision?” Karl Jung speaks of each of us having a ‘shadow side.’ There is a shadow side to the church. Struggle, discovery and reinvention are also a part of my story. It is a story the church needs. The good thing for me about coming out and being gay is the sad, depressing, dreadful and sometimes overwhelming struggle I have undergone has helped me to become this unique person that I am. To be challenged, to come out to myself, and to come out to others has taken courage, heart, and energy, which have ultimately resulted, for me, I believe, in a very high degree of integrity. I have had to learn what it is to be authentic and genuine. And denominations and congregations will need to go through the same struggles of coming out into the open as they support lgbt persons. It will take courage, heart and energy.

Ralph McFadden was married and raised two children. But in the mid-1990s, he decided that living with integrity meant living authentically, “coming out” as the gay man he was. In For Life is a Journey, author McFadden, a former pastor, denominational executive, and hospice chaplain, explores his own journey as he confronts the church’s blindness to the damaging injustice of homophobia.

For Life is a Journey includes McFadden’s reflections about claiming his identity as a gay man and “surfacing his soul.” He is honest about the depth of grief and anger that accompanied the changes he was forced to make in terms of work, his marriage, family, and friends. Through stories, poems and reflections, he discusses the sense of betrayal and abandonment that he experienced when the church that had so profoundly shaped his commitments to peace, reconciliation, and justice, now rejected him. McFadden explores his concerns on social issues that affect people who are lesbian, gay, bisexual, and transgender. He also recognizes the internal changes that have occurred as a result of his journey toward authenticity and truth. From the struggling, the discovering, and the exploring came renewal and rebirth.

Ralph G. McFadden has had a lifetime of work as a pastor, writer, consultant, and executive of a national denomination. Now retired, he most recently worked as a hospice chaplain and bereavement counselor. McFadden and his partner live in Elgin, Illinois.