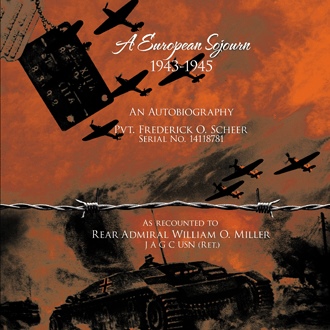 As the train pulled into the compound, the prisoners were required to disembark and to stand in groups in a vast field in the middle of which was a small table where two German officers were seated. We were separated from the table by at least one hundred yards and there were several buildings about another hundred yards beyond it, making it impossible for anyone to hear what was being said during the interrogations. One by one the POWs were required to go to the table and speak to the German officers, one of whom spoke flawless English with a distinctly British accent.

As I approached the table, the English-speaking officer looked at me and said, “Your papers, please.” I had no official papers, but I removed my wallet and put it on the table along with everything else in my pockets. The German looked at the contents of the wallet, but said nothing for a little while. After standing there for some time while nothing was happening I said to him, “If you are through with it, I’ll put all this trash back in my pocket.” The officer looked up at me with a scowl in his voice and said, “Don’t be cheeky. Pick that trash up and go to that building,” pointing to the building where, as I soon discovered, the showers were located. The other officer did not utter a word the whole time I was standing there. He just looked at me. After retrieving my meager belongings, I went to the building he had indicated. There I was told to take off my clothes and take a shower. That took care of my filthy clothing. I never saw any of it again.

After the shower, I joined a long line of other POWs who were being herded, totally nude, into what appeared to be a dispensary where we were each given a brief medical examination and some sort of inoculation. During the examination a German medic looked at me and, noticing my circumcision, asked, “Du Jude?” (I have since learned that by using du, the familiar form of “you,” he was not only questioning my religious status, but was speaking to me in a derisive tone. In this context, du is patently inappropriate; only the more formal form, sie, would have been proper.) I responded with a grunt. Finally, the entire group fi led through a supply area where we were issued prison clothes, which I think must have been clothing left behind by other POWs on their way to take their showers. At this point we were given forms to fill out asking primarily for name, rank, home address, next of kin and religious preference. I filled in the form correctly—except for the last question. I wrote “Protestant.”

A European Sojourn is the account of a small-town Jewish teenager who, on his first excursion beyond the borders of his home state, finds himself in a POW work camp in Adorf, Germany. From the day he enters basic training until he endures a cold German winter and makes his escape from enemy territory, Pvt. Frederick Scheer survives on little more than his good instincts, his quick thinking, and his calm and amiable nature. His is more than the usual World War II memoir. A European Sojourn is a coming-of-age story told with clarity, realism, honesty and humor.

Frederick O. Scheer grew up as the second of four children and the firstborn son of the only Jewish family in Eatonton, Georgia. In 1942, as a freshman at the University of Georgia, he joined the enlisted reserves of the U.S. Army and was called to active duty in the spring of 1943.

Over the years, Fred has enjoyed speaking to Kiwanis Clubs and other groups where, even today, he is asked predominantly questions about his war experience. Based on this discovery, he began to search out other ex-POWs and gather their stories as well.

Fred returned to UGA after the war and in 1947 married Gerry Kessler. The couple eventually settled in Atlanta, where they raised their three children. Now retired from a successful career in commercial real estate, he and Gerry—his wife of now 63 years—live in Atlanta.