Passing My Rich Heritage to Children 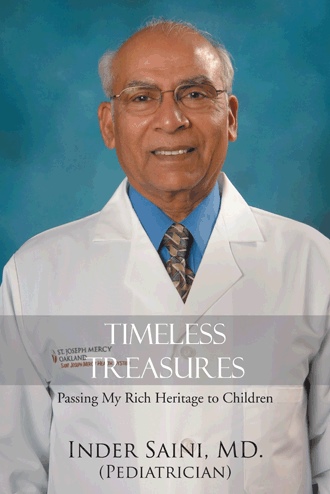 Dr. Inder Jit Saini is a very unique and selfless man who immigrated to this country from India. He came to the United States in 1968 to help his family’s financial situation. Even though he initially came to America to further his medical education he stayed here and fulfilled all of his personal and financial dreams. For the past 38 years he has been a practicing Pediatrician and continues to see patients to this day. Dr. Saini firmly believes in preserving his family history for his future generations. He wanted all the stories and events that have happened in the Saini family to be shared so everyone will remember where they came from and the sacrifices that were made to allow us to be here today. While settling and assimilating in the culture and society of a new country, he always kept his Indian ideals, culture, morals, and family values in the forefront of his mind. From starting senior social groups locally to founding charities for those less fortunate in India, Dr. Saini always had the determination to make a positive difference in the lives of others. He pays little mind to formalities or to keeping up with the latest fads or fashions. He knows that time is the only true asset in life and it must be used wisely. To him the true riches to be attained in this life are the close relationships you have with family and friends. Big houses, fancy cars and materialistic objects are nice and beautiful but only give temporary happiness. He finds happiness in the intangible sense of doing what is right, doing his duty, and making a positive difference in generations to come. These are the acts and deeds that ripple the pond and change the future forever. He is happily married to his dedicated and loving wife, Dr. Indra Saini. Together they raised two professional children and are also proud grandparents of three adorable boys. With all the extended family he has fifteen grandchildren and four great grandchildren. He is grateful to live with “Ma Ji”, his mother-in-law of 91 years, who showers him with love as if he were her own son. There are four generations of the Saini family living in America. For them he hopes this book will help them learn who their ancestors were, where they came from and the family sacrifices that were made so they could have a better life. Dr. Saini believes that being aware of our starting point allows us to have a clear goal in life in of where we want to go and what we want to achieve. Dr. Saini has traced his ancestors over 15 generations back when they moved from the Rajasthan village of Tijara to Delhi around 1830. After having lived in Tijara for almost eighty years they had to get accustomed to a new life and new surroundings in Delhi. They moved in groups for purposes of safety and to reduce the cost of living. The families were originally agriculturists by trade in Tijara but went into other areas of work once they moved to the city. They eventually found great success in the Tobacco and commission agent trade. Dr. Saini’s father became the first dentist and public reformer in the Saini family. The tobacco business was very fruitful and the family members were enjoying a better financial life. However, Dr. Saini’s father had an enourmous heart and couldn’t deny any person help if they needed it. He was so giving to the poor people around him that he literally gave away all his riches and wealth. There was nothing left for his wife and eight children. They struggled day to day and Dr. Saini himself grew up with the determination to help his family and not to repeat the financial mistakes of his father. He loved his father greatly but his family endured extreme financial hardship for the next forty years. This autobiography shares the journey of how a poor boy in India eventually achieved personal and financial success in America. It is an accurate account of how Dr. Saini struggled, sacrificed and succeeded in changing the lives of his family and friends. It gives some insight into how a boy who managed to live through and survived the daily financial hardship during his childhood, could eventually travel the world, publish books and achieve personal happiness, did lot of charity work, gained fame and fulfillment of his dreams beyond his imagination. One day your destiny will take you from this world and make you a part of history as well. This is Dr. Saini’s attempt to share and preserve his family history for future generations to come. His silent struggles and sacrifices were made to achieve a better life for himself and his family. He hopes this book will inspire you to value who you are and where you came from. He wants everyone to take the opportunities they have been given in life and run with them. Determine your destiny and make your history.

To achieve greatness in this life, we need to have a vision, a goal. When we are aware of our ancestors and our cultural heritage, we have a starting point, a real sense of where our lives began. We came to this country by our own will, with a rich culture from India. We struggled but worked hard with endless determination to be financially secure in this new country. We overcame many challenges and obstacles. After forty-four years of living in this wonderful country and having two generations of our family growing up here, I now realize that our children are not fully aware of the vast richness and glorious heritage of our ancestors. I believe that my generation is the only living link between our past in India and our future in the United States. It becomes my duty to collect all the information I can so that I can share it with my children. Please join me in this autobiography where I share my life’s struggles, successes, and secrets throughout my personal and financial life. I hope this inspires my children, grandchildren, and future members of our family to dream bigger and achieve great things in their lives.