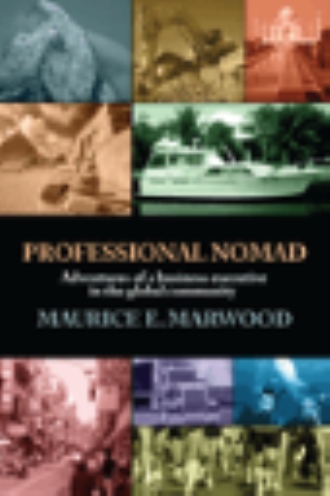 Maurice Marwood’s mother often urged him to stay close to his Ontario roots and raise his own farm family, but life took him elsewhere. After receiving an agricultural engineering degree in the early 1960s, Marwood was hired by Caterpillar Tractor Co. He climbed the corporate ladder in several US cities, earning his stripes by donning coveralls and climbing aboard the heavy equipment. Eventually he earned an MBA and accepted a customer service position that took his family to Switzerland, Africa, and the Middle East. By the time he was in his mid-thirties, Marwood’s career was in high gear and his travels had already become extensive. And he had only just begun.

Reflecting on his rags-to-riches life and career in Professional Nomad, Marwood credits his mother with teaching him independence and self-reliance—values that he adapted into a lifestyle and a world-view, and that continue to inform his management philosophy. The frame for Marwood’s memoir is his unique corporate career, built on a belief in science, reason, people, and traditional values. He cites Woody Allen’s observation that “eighty percent of success is showing up,” yet Marwood is not one to simply show up. “I need to be in control, to take action, and to show progress,” he explains. In his participative management style, Marwood is the coach; he trains and empowers his people, while focusing their endeavors squarely on the customer. He can be found lecturing engineers in post-Mao China, visiting logging camps in remotest Borneo, and advancing his ideas to employees in Montreal. Congruent with Marwood’s narrative is an explicit running argument that flows directly from his experiences. He idealizes technology, progress, the profit motive, and business for steadily improving the human condition. An admirer of Ayn Rand, he advocates laissez-faire capitalism and a live-and-let-live foreign policy.

Marwood adroitly segues from the tracking of his career to diversions such as long-distance running, climbing expeditions in the Alps and Himalaya, and voyages in the Caribbean and the Intracoastal Waterway of the US. While describing a thrilling experience on a scuba “shark-feeding dive” with his step-son in the Bahamas, he shares his knowledge of shark behavior and offers information about shark-feeding laws in Florida. Contextual information is delivered in an engaging style, and opinions are qualified and supported with personal experience and other evidence. Marwood’s passions reveal a man of boundless energy with an undying curiosity and a can-do attitude. Whether at the helm of his yacht or the helm of a corporation in need of a turnaround, Marwood’s voice and approach are remarkably consistent. Even his last few chapters, concerned with ethics, religion, and politics, are alive with stories and persuasive logic.

Marwood is an authentic American success story. In 2005, at sixty-four years of age and while serving as managing director of Capital Machinery Limited in Taiwan, he climbed Mt. Yushan, the highest peak in Northeast Asia. Having learned that “success is a journey—not a destination,” Marwood would likely argue that success came in the pursuit, rather than the achievement, of his goals.

Go behind the scenes for a firsthand look at the corporate culture, values, management styles, challenges, and opportunities that cause organizations to succeed or fail. In this straight-talking account of his life and career as an international business executive, Maurice Marwood guides the reader through the corridors of corporate power and offers down-to-earth strategies for succeeding in a globalized economy.

Throughout his 40-year career, Marwood fought to defend the virtues of capitalism and free enterprise against a constant onslaught of socialism and anti-business elements. Working in over 85 countries (in the Americas, Europe, Africa, the Middle East, and Asia); he was often on the cutting edge of international business developments. He first visited China, for example, shortly after the death of Chairman Mao, at the very beginning of the country's period of phenomenal growth. Later, while living in Taiwan, he devoted several years studying the history and culture of the ethnic Chinese, analyzing the complex, antagonistic relationship between the People's Republic of China and the Republic of China on Taiwan, as well as the reluctant role played by the United States.

Marwood's candid memoir of his on-the-job successes, failures, and frustrations intertwines with recollections of personal adventures -- mountaineering, marathoning, cruising, and diving -- alongside reflections on ethics, morality, spirituality, and the epidemic of mysticism that destroys the lives of so many. Professional Nomad is not only a reference for those aspiring to a successful career in international business; it is a blueprint for a flourishing life - personal as well as professional - one lived with passion, determination, and ultimate satisfaction.

Maurice E. Marwood grew up after the Second World War as the son of a struggling, part-time farmer in eastern Canada. He eventually escaped the clutches of poverty and earned an MSc in engineering from the University of Guelph and an MBA from the University of Chicago. During his early career, he spent 20 years in increasingly responsible international positions with Caterpillar and, later, an additional 10 years managing two Caterpillar dealer organizations; first, as President of the dealership in the Bahamas, and most recently as Managing Director for the dealership in Taiwan. An expert in corporate turnarounds, he spent several years restructuring and renewing a variety of business organizations struggling for growth and profitability; his executive-level leadership has spanned manufacturing, distribution logistics, marketing, and international sales of industrial equipment and packaged consumer products.

Marwood has served as a Rotarian, Director of the Nassau Institute, Governor/Director of Chambers of Commerce, advisor to the University of Calgary Faculty of Management, and to the Conference Board of Canada’s Operating Council for Business Excellence. He has been a frequent presenter and panel participant at university and industry association gatherings, and published articles on business management, leadership, and social issues in magazines, newspapers, and websites. In 2007, he was the first foreigner to receive a special annual award from the Council of Labor Affairs of the government of Taiwan, for innovation in the development of Human Resources.

From a young age, Marwood instinctively knew that life was for living and discovered an insatiable appetite for experiences and ideas. He worked hard to maintain a balance between life's critical success factors -- the material and the spiritual -- making time to raise a family and pursue such adventures as climbing the Matterhorn, trekking Nepal, marathoning, skiing, snowboarding, scuba diving, and cruising eastern North America and the Bahamas. Firsthand involvement in a wide variety of events and situations shaped his values, opinions, and philosophy of living, which he shares with honesty and passion.