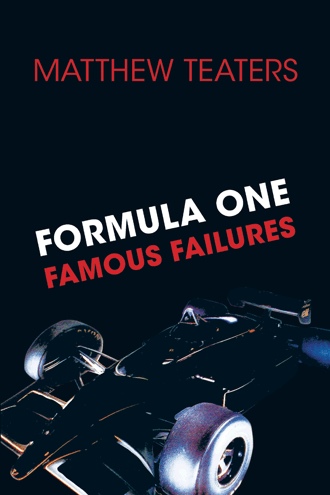 Please click on this link for Free Preview http://formulaonesfamousfailures.com.

Created in 1950, the Formula One World Championship is the pinnacle of auto racing. The most popular form of motor sports on Earth, some of its marquee teams are known throughout the world, such as Ferrari, McLaren, and Lotus. Formula One’s glamorous outlook and incredible marketing power make one believe that it is a fantasy world of expensive machinery and super hero drivers, a dazzling array of lines and colors. But if one looks closer into the history of the world Championship, one will notice another side to Formula one, a side of failure. It is obvious that not every car can be a Lotus 49 or a Williams FW 14B. And not every engine can have the impact of a Ford Cosworth DFV or a Honda turbo, in fact very few are, but some stand out as some of Formula One’s most famous failures. What are the worst? That is certainly open to debate. Each year, for every winner, there are numerous disappointments, but this novel hopes to illustrate the fights and famines of the Grand Prix World.

Matthew was sick from the first day he was born. Even though he suffered all his life he dedicated his life to taking care of others. He was a wonderful Christian and never met a stranger. He was always going to church, visiting the sick in hospitals in nursing homes and helping anyone that he could. His greatest loves were the Lord and racing. He taught himself to read by reading racing magazines and loved every minute of it. Matthew wrote for a Formula One Column on the internet. His great love is this book. We hope you will enjoy reading the book as much as he enjoyed writing it. He put his whole heart into it. Even though he suffered his whole life he was on the national dean's list for his writing. He was our hero and will always be. He was taken from us so early in life but the Lord needed him more. Please enjoy his book for his memory. We just wish he could have known how much it pleased others. We love and miss him, Your family