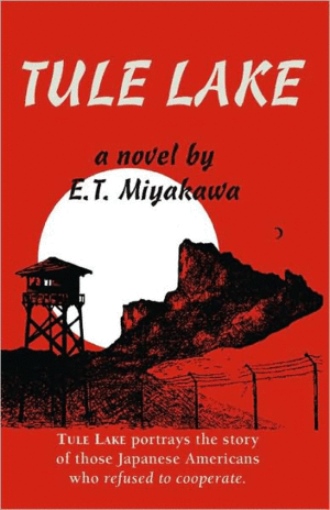 TULE LAKE describes the anguish and pain of those men who stood up to Executive order 9066 in order to PRESERVE the Bill of Rights and the U.S. Constitution. TULE LAKE speaks for the Japanese Americans, but its lessons are universal. They are lessons in FREEDOM and JUSTICE. They are lessons of how our democracy failed to protect the rights of all its people.


TULE LAKE answers the questions: of the ten camps, why did Tule Lake become the most violent; why did Tule Lake have a stockade; who were the resistors; why did thousands of young Japanese Americans renounce their American citizenship; what was the Denationalization Bill passed in Congress; what special interests were served by the removal of Japanese American from the West Coast?


TULE LAKE is the first Japanese American novel to portray the passionate and at times desperate struggle for justice and freedom from within the confines of America's concentration camps, by those who refused to cooperate with the internment of 120,000 of their fellow Americans of Japanese ancestry.


"TULE LAKE should be read in every American history class...The endless days of camp life are detailed: the pittance -- 50 cents a day -- received for work; the conflicts which develop as different factions -- from the fanatical pro-Japanese to the willing Nisei soldiers who offer their lives for America -- come to the fore. We see families split as loyalty to the U.S. government is determined on the basis of two key answers in an oath-questionnaire form."


"TULE LAKE out to be required reading for those who do not remember this shameful episode in American history. But more important, it ought to be required reading for those who believe that the needs of 'national security' sometimes justify the infringement of individual liberties. The story of the relocation camps cannot be told often enough, and TULE LAKE is a good way to do it."

Edward Miyakawa was born in Sacramento in 1934. He was raised in the Sacramento area near his mother's parents who farmed in Florin after immigrating from Japan as young adults. The entire family was interned at Tule Lake together, but after a year, Edward's father found a sponsor in Boulder, Colorado where they lived for the duration of the war. After his father attempted to establish the family in Colorado, they decided to move back to Sacramento.
In the mid-fifties, Edward lived in Japan for two years as an enlistee of the U.S. Navy. He graudated from the University of California with a Bachelor of Architecture of Architecture degree in 1962. He has practiced architecture on the coast of Oregon for over 30 years, raising an adopted family of six children with his wife, Mary. They adopted Kimiko form Korea, Huong and Mahn from Viet Nam, Keith and Isaac, African-American sons, and Kanka from India. They have four grandchildren.
Through the lives of his children and grandchildren he has extended a 700 year history of a samarai family to the dream so well expressed by Martin Luther King Jr. that there would come a day when children of all races will experience equality and justice and freedom in a world that respects the intgrity and talents of all peoples.