Skin in the Game

Journey of a Mother and Her Marine Son 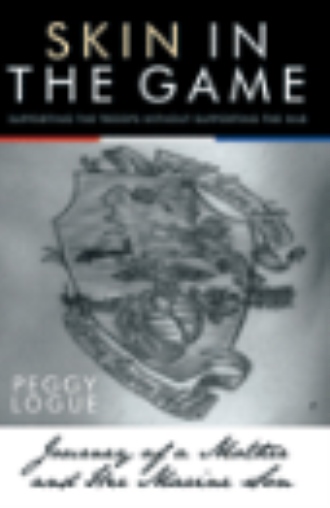 When Peggy’s nineteen-year-old son, U.S. Marine Michael Logue, is deployed to a volatile area of Iraq, Peggy suddenly faces an alarming challenge to her mama bear sensibilities. She struggles to remain silent, desperate to protect her son.

Peggy’s protests, her stress over Mike’s deployment, and her fierce pride in her son hurtle her along an emotional roller coaster for the entire year of Mike’s tour. She asks the tough questions and demands answers. What she discovers, however, is human nature’s predilection for violence. Only by becoming warriors for peace will war cease to exist.

Intense, raw, and profoundly honest, Skin in the Game illustrates the human side of war and the daily struggle for peace. But even more, it is the story of the struggle of an anti-war mama bear and her son in combat listening, respecting, and truly loving each other.

Peggy Logue is the mother of three children. Her youngest became a U.S. Marine and at the age of 19, was in some of the fiercest combat in Iraq with Lima Company 3/25th. She holds a master’s degree in education and has had several articles published in books and journals. Logue lives in Lebanon, Ohio, with her husband, Jerry.