The Totality Of God And The Izunome Cross

Unlocking the Secret to the Riddle of the Ages 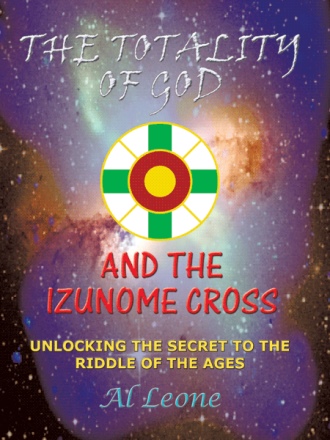 THE IZUNOME CROSS: SACRED SYMBOL FOR THE AGE OF LIGHT

Every person is another aspect in The Totality Of God; for, within the soul of a single human being is contained the spark of God’s Divinity.  It exists so that for a brief moment in the vastness of time that is called eternity, God can come to this Earth in a physical form, as us, to do His work.

However, no two people on this great planet see God in exactly the same way – just as no two people have the same fingerprints.  Everybody’s beliefs are different.  As a matter of fact, the Truth of God is so immense that throughout time no single system of spiritual philosophy could accommodate its enormity.  For this reason, as Humanity evolved on Earth, so did four unique but wonderfully compatible views – or Pathways to Divine Light and Universal Truth – of His existence.  And yet, the truly amazing thing is that just as all of an ocean’s potential is present in a single wave, so is all of God’s magnificence in any of His parts.  As a result, any one path born of Light and Truth in and of itself will lead to the God of your understanding, but to get the best view of His panorama you should look at all of them.  This concept of a unified worldview follows from the opening principle of The Totality Of God.

My inspiration for it came while reflecting on the image of the Izunome Cross.  Izunome (pronounced ĭz’-oo-nō’-mā) is a Japanese word for balance; and the design is based on a balanced cross, which is found in many ancient traditions.  This unique configuration was created by Mokichi Okada, the founder of Sekai Kyusei Kyo – an international spiritual movement dedicated to advancing his teachings.  He designed it about 50 years ago to represent an underlying truth in his ministry: the belief that the world and all its inhabitants could not heal until they were brought into balance spiritually and physically.  For him, this meant the East and the West must eventually unite through a common understanding to accomplish a greater planetary purpose – the creation of a Paradise on Earth.  To this end he taught and practiced a philosophy of balance, the Izunome Principle, and detailed its application in numerous writings.  I’ll offer my own definition: The perfect balance of two sides is the point where they meet, from which either side can be favored – at the time and to the degree needed – depending on circumstances.

Mokichi Okada’s views easily incorporate into what I’ve come to understand to be the evolution of human spirituality as it occurred over the course of our existence as sentient beings.  As I like to describe it, from the cultures of the East and West had grown two main theistic belief systems.  These had sought to account for our spiritual nature in the context of some eternal Presence or human-like Personification.  However, such an accounting had also been pursued in two ways not specifically addressed in his original vision, perhaps because from his perspective in pre- and post-war Japan the conflict truly did seem to be between the East and the West.  From my perspective in America, with the entire world beginning to embark on a new, technology-driven millennium, the bigger picture needing to find balance is becoming clear.  That is the one between Religion and Science, forces that have been at odds since Humanity first became aware of the difference between the principles of spiritual and physical, positive and negative.  To accomplish this needed planetary healing, the East and West must also seek to balance with what I refer to as the North and South.  They are the deistic traditions that had simultaneously evolved around the exploration of human spirituality as manifest in our intellectual and physical natures.  In other words, it’s the integration of Spirit, Mind and Body – God’s own three Divine aspects – into the Universe’s four energetic alignments – East, West, North, and South.

Mr. Okada was an atheist prior to his awakening, a well-respected businessman and gifted artisan with several patents for jewelry design.  His Izunome Cross, therefore, had the refined look of a piece of beautiful jewelry, while serving perfectly to represent the truths he wished to share with Humanity.  It is interesting, though, that he seems to have left much room to interpret what deeper meaning might be applied to the design as a whole, as well as each specific part of it.

The basic principles of the Izunome Cross were set by Mr. Okada in several key teachings.  In summary, he stated that the Horizontal pole embodied the ideals of the West, which had advanced the growth of civilization through materialism, while the Vertical pole symbolized the East, which had concentrated, rather, on the advancement of civilization through spiritual means.  This philosophy was drawn from his understanding of Japanese principles of life – Daijo (inclusive, flexible) and Shojo (exclusive, rigid) – likewise associable with the West and East.  Moreover, he said that generally speaking, Christianity, prevailing in the West, is also Daijo, and Buddhism, predominant in the East, is Shojo.  So, even for him the West and East represented different things, from physical vs. spiritual cultural natures, philosophic life-principles and great world religions, to planar alignments vs. points on a compass.  He affirmed that cultural and philosophic discrimination, which had been the case throughout what he referred to as the Age of Night, must now disappear for Humanity to advance into the Age of Light – something he believed was already starting to take place.

It makes sense, then, that he knew his spiritual roadmap, the Izunome Cross, must also expand to accommodate these changes in human growth and awareness.  For example, by the time he died in 1955, the East (most specifically Japan) had yet to realize the full materialistic potential it would eventually achieve.  And the West was still to discover that the technology it had so actively advanced during the Age of Night could actually be used in the Age of Light to offer proof of the existence of God.  It is possible that Mr. Okada didn’t understand the full significance of what he had designed at the time.  However, I feel he sensed it but realized that the world and its collective awareness still had to evolve a bit more before we would be ready to accept it – and then use it.  At the dawn of this new millennium, with the world perched on the potential brink of destruction from without and within, I believe he feels the right time is right now.  We are the ones who will get to decide the direction in which the scales will tip their balance: Armageddon, or Paradise on Earth!

(These are the opening paragraphs from "The Totality Of God and the Izunome Cross."
They serve to establish the philosophy, as well as the energetic nature of the scared symbol at the core of its truth.)


Additional excerpts are available at:

The Totality Of God

To join in the discussion please visit our forum:

In 1993, Al Leone began to look for the answer to a simple personal riddle – why wasn’t his life working out the way he planned?  He embarked on a spiritual quest that within a few years found him deep within the Universe’s greatest mystery: how did it come into being and was some eternal essence or personality responsible for it?  Revered under many names, from Adonai, to Allah, to All That Is, he went searching for proof of the existence of God.  You are invited now to come along on his journey to unlock the secret to the riddle of the ages.

Within a powerful, contemporary sacred symbol designed in the East and known as the Izunome Cross, the answer was found and then formulated into a daring, new worldview that integrates metaphysics, mysticism, philosophy and science.

This is The Totality Of God.  Through it you will:

The Totality Of God

Al Leone, a graduate of Stevens Institute of Technology, from an early age showed a keen interest in science and invention.  But an even-stronger love for music later drove him to become an accomplished musician, songwriter and producer.  When a longing to reconcile his spiritual and physical truth took him in the direction of philosophy, he surprisingly discovered that music as well as mathematics would provide the keys.  His search quickly revealed a core issue facing all humanity – the need for Religion and Science to work together to insure its survival.  Out of his desire to help advance that ideal came a scientifically-based, unifying philosophic vision – The Totality Of God.

For more information on the author or his interactive webcast please visit:

The Bridge of Truth

Become a part of an online community where you can make a difference: