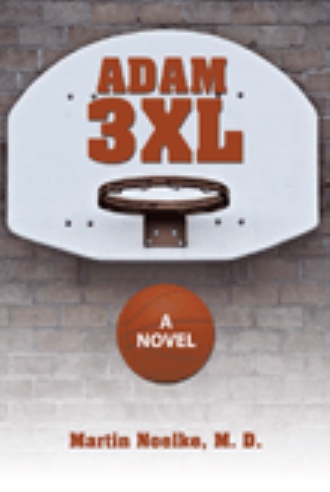 At some point, she also asked him to tell her something about his life. Adam paused for a moment. The most recent past was not suitable for discussion. So he told her about his valley, his wonderful father, and the time at high school. He formulated his dreams for the future in somewhat vague terms, such as studying literature or a similar subject at the college. He did not mention a word about the round piece of sports equipment that he had been able to handle so well in the past. She certainly would not have believed him and would have laughed as she got up to leave. Instead, he provided a witty commentary about how the street basketball players playing on the opposite side of the road were proving their shooting skills in someone’s yard. Suddenly, the ball rebounded, fell into the street, and rolled toward their table. With a speed that astounded her, Adam stood up, stopped the ball with his foot, lifted it very elegantly with the tip of his shoe, and began to dribble in place. “Hey, chump, give the ball back,” yelled one of the boys. Adam did not let that put him off. Using an old trick, he let the ball rotate on his index finger. “Hey, fatso, we aren’t in the circus here - give the ball back.” Adam looked at Sarah and began to laugh. “Did he really say fatso?” With a perfect baseball pass, he sent the ball on its way. After more than 30 yards, the ball hit against the board and just barely missed the rim. The boys on the other side clapped in appreciation, and Adam sat down. “Sorry, Sarah. At least that was better than a brick. After all, beautiful women disrupt the concentration.” Sarah had followed the entire scene in disbelief. “That was really fantastic. The ball almost made it in. You don’t just throw a pass like that by accident. Don’t you want to explain anything else to me?” Adam played the innocent little angel. He acted very embarrassed. “But that was just luck, the good luck of a – chump.” Her unerring instinct told her that this wasn’t even half of the truth. So she said in an amused tone, “You don’t really have the talent to be an actor, so you would have been better off as a basketball player.” “Unfortunately, life doesn’t happen in the subjunctive. What could have been, what would have been if…” Adam looked up pensively. For Sarah, this specimen of a 3XL had become increasingly interesting.

Adam 3XL tells the story of teenaged Adam, a basketball player who manages his way out of personal crisis and disease, which caused him to gain weight. He accomplishes a turnaround by following a few simple, proven health principles. The book addresses young people or anyone with a weight problem, who has acquired an unhealthy lifestyle. The story is meant to inspire them as well as provide them with the tools to make a change for the better. It uses language, motives and symbols deliberately chosen to address a large readership.

As a general practitioner, Dr. Martin Noelke encounters patients on a daily basis, who as a result of complex individual and environmental factors have acquired an unhealthy lifestyle combining poor nutrition with little exercise. With over twenty years of professional and personal experience, he can accurately depict the causes as well as the psychological, social and health-related consequences of Adam’s lifestyle.

His approach is deliberately different from standard approaches in health education. This is a story to which readers can relate on a personal level, it will inspire and empower them to change. It’s a fascinating story about basketball, love, friendship, and some simple nutritional principles.