How To Argue Abortion Intelligently And Live To Tell About It 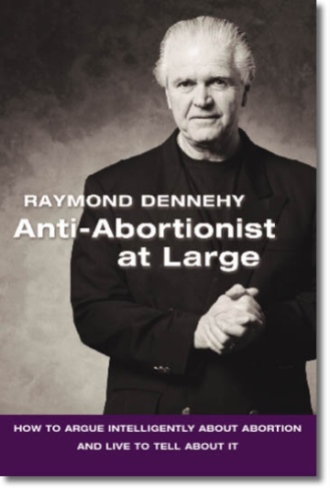 Anti-Abortionist At Large: How To Argue Abortion Intelligently And Live To Tell About It is my autobiographical account of almost four decades of publicly speaking against, and debating on, induced abortion before radio and television audiences as well as community groups and on college campuses. Because much of this narrative unfolds in the context of my association with pro-life groups, the book is unavoidably also an anecdotal history of the pro-life movement in America, a movement that parallels in importance the anti-slavery movement of the 19th century. The book is equally a manual for debating against abortion. This, too, was an inevitable consequence of telling his story. My purpose in writing it, in the first place, was to share my experiences of speaking out on what has to be the most controversial topic of the past few decades. I've arranged the chapters the following way:

Chapter One, "Nobody's Ever Accused Me of Being Brilliant," offers three vignettes of my entry into the public debate on abortion, the first, a lecture before a class of troubled teenagers, the second, a guest appearance on a popular radio talk show in the San Francisco Bay Area, and the third, a debate on the University of San Francisco campus against a nationally prominent feminist philosopher. It would be a massive understatement to characterize the three events as "a learning experience".

Chapter Two, "Fighting Smog With a Crowbar," tells the story of the beginning of the national debate on abortion, as I saw it from my perch in the San Francisco Bay Area. Community groups and high school classes increasingly invited me, then a young assistant professor fresh out of graduate school, to address them on the topic of legalized abortion. As the debate progessed, we formed pro-life groups, like United For Life in San Francisco, to provide a register of scientists, philosophers, and lawyers who would be available to speak in public to counter the arguments pro-abortion groups like NOW and NARAL. The chapter gives an insight into the creation of California's first liberal abortion law, the "Therapeutic Abortion Act," in 1968 and tells of the demoralization the pro-life supporters suffered with the U.S. Supreme Court's Roe v. Wade decision in 1973.

Chapter Three, "The Man Who Wouldn't Have An Abortion," discusses my conversations with women who have had abortions and points to the "sexual revolution" as the reason for large number of legal abortions performed yearly in the United States. Chapter Four, "Bad Companions," evaluates the charge that the pro-life movement encourages violence against abortionists and their staff. The chapter leads into the evaluation with a discussion of the "boors and jerks" I"ve met in the pro-life organizations. Also discussed is the selective attitude society displays towards violence when large organizations and prominent figures see no inconsistency in condemning the death penalty or sending our troops to fight in Viet Nam, but, at the same time, turning a blind eye toward the wholesale killing of the unborn. My conclusion is that the violence that pro-lifers commit against pro-abortionists is verifiably miniscule, though unjustifiable. What is not miniscule and is equally unspeakable is the legacy of Roe v. Wade.

Chapter Five, "The Hidden Child," starts the "how-to" part of the book. There I present my experiences on the debate podium, mostly before students in a class of 700 at the University of California in Berkley. The directors of the program that sponsors the course have invited me to debate abortion every semester for 15 years now. "The Hidden Child" refers to my persistent experience of debate opponents who dodge questions like, "Is the fetus a human being?" and "Does induced abortion kill a human being?," as if these questions were fatal communicable diseases. I've seen my task in debate as that of staying doggedly on those questions despite all the distractions and dodges that my opponents and members of the audience use. In the course of showing the readers this dodge, I exemplify by actual experiences what I've learned are the do's and don't's of debating a hot-button topic like abortion. These rules-of-the-road extend from avoiding too much logic to attending to the way you dress for the occasion.

Chapter Six, "Rescuing the Hidden Child," presents the acutal argument I use in debate against abortion and my responses to objections that are leveled against it. It's an argument that I've sharpened over the past thirty-six years. Rather than trying to prove that the fetus is a human being or person from the moment of conception, I take the weaker position and argue that all the evidence mandates the conclusion that the fetus is probably a human being. Therefore the diliberate killing of unborn implies a willingness to kill an innocent human being. I then proceed to argue that legalized induced abortion violates the right to life and thus strikes at the very heart of the democratic charter.

Chapter Seven, "He's Not a Physician?," is a continuation of the claim I make in Chapter Five that pro-abortionists dodge the question of the status of the fetus. The chapter's title comes from the strident response an opponent from Planned Parenthood made about me when I accepted a request from a student in the audience to explain what "parial-birth abortion" is. I unfold the procedure, step by step, to show just how grisly the procedure is, pointing out that the acceptance of induced abortion, even at the early stages of gestation -- especially with such justifications as "Having the baby will ruin the girl's life," implies that it is all right deliberately to kill innocent human beings at any stage of life. Partial-birth abortion may repel the pro-abortionists as it does us. Why then, don't they condemn it? I believe their silence comes from the realization that, since human life is a continuum from conception until death, making abortion illegal during its later stages could lead to making it illegal at its earlier stages.

I end the book with Chapter Eight, "The Kiss of the Vampire." Its speculative character sets it apart from the earlier autobiographical chapters. It interprets the abortion culture as a manifestation of the vampire myth: just as the vampire sustains his or her life by draining the victim of life, so one consequence of the abortion culture - fetal tissue tranplants, embryo stem-cells for cloning, etc. - invite the destruction of unborn to improve the health and vitality of adults.

Raymond Dennehy is Professor of Philosophy at the University of San Francisco. After serving from 1954-58 as a radarman in the U.S. Navy aboard the heavy cruiser, USS Rochester in the Pacific Theater of Operations, he attended the University of San Fransisco, obtaining a B.A. in philosophy. He studied philosophy in the graduate school of the University of California, Berkeley, finally getting his Ph.D. in philosophy from the University of Toronto. His previous books are Reason and Dignity and an anthology he edited, Christian Married Love. He is frequently invited on radio and television programs, as well as university campuses, to speak and debate on topics such as abortion, physician-assisted suicide, and cloning. He is married to Maryann Dennehy, has four children and eleven grandchildren.