by James A. White Jr. 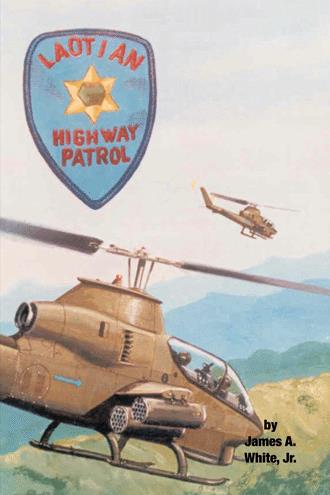 In a terse narrative, James A. White, Jr. provides a warrior's view of a period of covert warfare during the Second Indochina War, the Vietnam War, and a personal view of a man's love for combat and the country in which he is fighting.

From the command pilot's seat of an AH-1 Cobra gunship, the reader experiences the daily grind and thrill of combat flying in the secret war of Indochina. White, a decorated veteran of the Marine Corps, Army, and Air America, reminisces on his tour with the Griffins flying out of Camp Evans and Quang Tri in support of MAC-V-SOG (Military Assistance Command - Vietnam, Studies and Operation Group) covert operations and Operation RIPCORD in the A Shau Valley.

White also reveals the personal side of being a warrior in an unloved war separated by space and temperament from wife and children. He glowingly reveals his love of the Vietnam for which he is fighting and his Vietnamese family. From an awe for the terrain and development of Vietnam to his informed naiveté with the indigenous people and their customs, he demonstrates his fond memories of this combat-crippled land.

The spirited and salty narrative opens at Quang Tri CCN (MAC-V-SOG Command and Control - North) with an account of the prelude, conduct, and aftermath of a "no extraction is routine" mission to recover RT (Reconnaissance Team) Coral, a Special Forces team of Americans and Montagnards. In the telling of this mission, and throughout the narrative, the reader is introduced and educated in the language of air combat helicopter-style and tantalized with introductions to the equipment of Snakes (Cobra gunships) and Slicks (non-gunship Hueys):

All Hueys should be set up for strings and every crew member flying should have a stabo rig on. The nylon webbed harness, called a stabo rig, has several D-rings attached to it. If you're shot down and not able to be picked up by a landing Huey, a hovering Huey equipped with strings can get you out. The crew-chief and gunner throw several strings down and you hook onto them. The ride is sickening, scary, and gut-wrenching.

This mission and the others related are fact. To protect the identity of certain participants and to simplify the telling, names have been changed and characters in the narrative are sometimes amalgams of actual participants. The missions themselves are related, when appropriate, from White's first-person viewpoint. The missions are told in the language used by operations personnel and couched in the dialogue common to the Vietnam era of helicopter combat.

Well, another typical CCN mission. As time marches on, things get worse and worse. Just our luck, but then we wouldnÕt expect it any other way. I switch to UHF as the package with Tex leading arrives. Without being told, they join into Marty's and my loose daisy chain. 'Okay, here's how it goes.... I'll head directly toward Kilo, break over them in a tight two-seventy to the right. I'll then nail the Sierra portion of the Lima Zulu, then turn toward you. When I do this, Fox Lead will head toward the Lima Zulu, with all four Bears on you. You'll go in, pick up, and do a three-sixty and come out the same way. Do not... do not... do not overfly the Lima Zulu.

'Chalk Two will start heading for the Lima Zulu after a forty-second separation, understand?" I wait for a reply, which comes right away. "Chalk Two will enter and leave the same way as Lead. I don't think we'll need strings but be careful of the scattered trees to your nine o'clock going in. Chalk Three and Four will hold a high orbit here and Lead will return here after the pick-up. Questions?'

There's silence on the radios. I know they are talking on the unit VHF, but it will only last a minute.

So much for any more questions....

As the narrative unfolds and White approaches the end of this episode of his combat experience, he finally lets us in on the rewards to be expected from combat in the most intensive covert actions fought in this century.

The only physical awards one can possibly get are the few patches that we wear. To most of us, the Laotian Highway Patrol patch says it all. Though copied from a stateside law enforcement unit, it represents a lot more to us. We don't ticket speeders or those making U-turns, we kill them. The Ho Chi Minh trail is really the most dangerous highway in the world. And we, the aerial law enforcement, have the toughest beat of all. Those who see it know that we earn our flight pay.

Laotian Highway Patrol is a warrior's remembrance of a unique time, place, and association of people in time of crisis and danger. The personal nature of this narrative leaves the reader grateful for the chance to walk in another's shoes during this memorable time.

James A. White, Jr., known as "JAW" in the U.S. Marine Corps and as "Sneaky" in the U.S. Army, was a warrior of the Vietnam War. His first tour in Vietnam, he served as a U.S. Marine helicopter gunner and crew-chief on CH-46 type aircraft with HMM-262. During this tour he became the first enlisted Marine to receive the Distinguished Flying Cross since World War II.

After completing his U.S. Marine Corps service, White transferred into the U.S. Army. There after a short Vietnam tour as an infantry Sergeant, he became a Warrant Officer/helicopter pilot. As a pilot White flew for two tours in Vietnam on Cobra gunships and LOH scout helicopters. He flew many missions along the DMZ and into both Laos and North Vietnam. Among his decorations are three Silver Stars, five Distinguished Flying Crosses, three Purple Hearts and 130 Air Medals.