THE SECRETS & THE MYSTERIES OF GENESIS 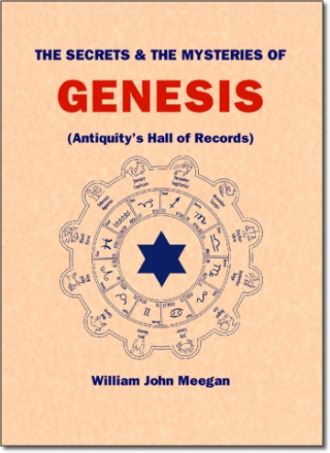 The author brings the reader thoughtfully into the mystical realm that has been esoterically written (coded) into antiquity's literature, art works, and monuments. With the use of simple mathematical and linguistic patterns the scribes of antiquity had a far different spiritual and educational agenda in mind then that which is given on the surface of their literature and historical texts. The ancient sages left behind libraries (Hall of Records) of their teachings outlining this spiritual esoteric science: the Word of God, hiding them in plain sight: just beneath the surface of the world's literary, religious, and historical texts.

The true and authentic message emanating from the spiritual realm, to the individual initiate, is that no matter how intelligent the world proclaims itself to be it knows absolutely nothing about anything when compared to its wisdom. The only way the scribes of antiquity could demonstrate that fact was to establish it on such a colossal worldwide scale the initiate would not even think of questioning its efficacy.

The sages of antiquity wanted to educate only the most sincere seekers in search of spiritual truth: only those that had enough (fleeing mentally from) of the facade of the material existence that nothing would deter them from knowing the truth. Using the esoteric (hidden) symbolism that is inherent in the facade of the material realm the ancients esoterically coded this spiritual science into their literature, art works, and monuments without leaving obvious clues to it existence: rather they left 'common sense' clues. Most important; this science would be there in the literature and sacred scriptures of the world waiting for those that really wanted to know the truth concerning their human and spiritual condition. This science was written for those that wanted it not for those that needed it.

By using the texts of the Hebrew Torah especially employing the 1st chapter of Genesis, Dante Alighieri's (1265- 1321) "Divine Comedy", the Great Pyramid, and much more the author demonstrates the systematic and scientific utilization of archetypal motifs that literally permeates them with linguistic and mathematical scenarios, which outlines a universal cosmic spiritual system of thought, unknown to the religious and academic communities around the world in modern times.

There are many intriguing scientific discoveries outlining the esoteric science in this work. The insights envisaged through this paradigm will become a treasure chest of spiritual ideas and milestones for the reader: hopefully encouraging the initiate to search for ultimate spiritual truth via his or her own self- motivated efforts and possibly even to become an individual that will enhance mankind's understanding of God's Word, which I have defined, and have come to acknowledge, as the esoteric science. This work will become the seminal textbook outlining the rudiments of the esoteric science and it will become the criterion by which all future generations will study hermeneutics in relationship to the literature, art works, and monuments of antiquity. All future discoveries in this science will be judged by its standards.

Born in Jersey City, New Jersey in June 1948 the author was raised in a Catholic

Having enlisted in the Army in December 1967 the author served his country as a Medical Corpsman spending an 11-month tour in Viet Nam. The author obtained an Honorable Discharge. The experience in Viet Nam cause him to become introspective and he began quietly to search out the deeper meaning to life's more perplexing questions. Taking advantage of the GI Bill the author enrolled in Computer Program Courses obtaining an AOS Degree in Computer Programming. Some years later he would return to college to further his education in computers and obtain two additional AOS Degrees in Information Technology Internet Administration and Information Technology Programming.

In August 1974 the author began seriously to study the Judeao Christian Scriptures beginning with the King James Version. Over the years he has built an extensive library geared to explaining the Bible. In December 1976/January 1977 he began to study the metaphysical works of Mary Baker G. Eddy (Christian Science) from which he was influence a great deal in his overall outlook on life.

On April 11th-15th 1983 after making a major mathematical breakthrough in his biblical studies on the 1st chapter of Genesis the author began to research Dante Alighieri's La Divina Commedia for the next twelve years. He put all his study, for the most part, on the Bible on hold while he conducted his investigation into Dante mathematical system. In 1994 the author became a lifetime member of the Dante Society of America. In April 1998 his mathematical thesis on Dante Alighieri's La Divina Commedia (The Divine Comedy): THE CONQUEST OF GENESIS: A Study In Universal Creation Mathematics was published by the Edwin Mellen Press (an academic publisher). This publication was rare for an non-academic because the academic publisher assumed the author, without evidence, had a doctorate in mathematics based upon the sophisticated mathematical system discovered in Dante Alighieri's work. Once the error was discovered, via the author's vehement disclaimer to the contrary, the work was mandate by academic protocol (snobbery) to die in the publishing house. This previous work has been incorporated into the present volume's 6th, 7th, & 8th chapters along with all new materials discovered since its publication.

The present work is a follow-up volume incorporating the first volume because this second volume was written for the public not for the academic. This second volume demonstrates that Dante Alighieri obtain his mathematical system from the 1st chapter of Genesis and the Great Pyramid.

The author's in June 2006 submitted an academic paper: THESISTINE CHAPEL: A Study in Celestial Cartography: peer-reviewed and published by the Rose+Croix Journal, which can read online. This paper decodes the frescos in the chapel that displays a commentary on the first chapter of Genesis: there are numerous patterns to the symbolic imagery, which were never written about by Michelangelo or the Church.

Another major work that is a followup on the present work, is in the developing stages: TRANSUBSTANTIATION: The Secrets & The Mysteries of the Eurharist, which is a comprehensive commentary on the mathematical and linguistical patterns of the first four chapters of Genesis. It is plan to be finish by June 2012.

To contact the author, you can e-mail him at williamjohnmeegan@yahoo.com