Loose Theatre In and Out of My Memory 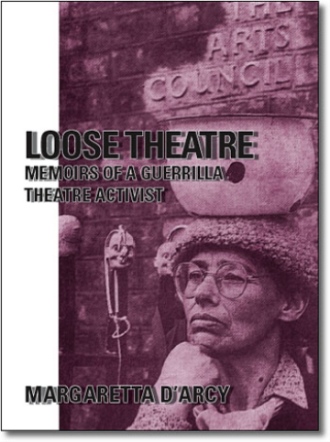 This is a fascinating collection of memories, a journey through a variegated landscape of the author's life and background, starting with her Jewish mother's parents in flight from the pogroms of Czarist Russia and her Irish father's involvement in the War of Independence on the streets of Dublin. A mixed marriage in a theocratic state; and four little girls in the 1930's Margaretta joins the theatre in Ireland as a teenager: and then in London, where she meets English playwright John Arden. They both work at the Royal Court in its early days, and then undertake a fruitful play-writing (and producing) collaboration, over 20 plays for stage and radio. Motherhood proves incompatible with mainstream theatre, until - by becoming a member of the Aosdána - Margaretta finds the financial freedom to explore real-life (i.e. 'Loose') theatre at Greenham Common, and at the United Nations, the biggest playhouse of them all.

Born in 1934, has worked in Irish and British theatre, collaborated on over 20 plays for stage and radio with John arden (e.g. "The Non-Stop Connolly Show", "The Island of the Mighty", "Whose is the Kingdom?"). Her other works include: "Tell Them everything", "Galway's Pirate Women", "Awkward Corners". Founder of Women in Media & Entertainment (which has consultative status at the UN), and Radio Pirate-Woman. Has been in gaol five times in India, N. Ireland & Britain, for human-rights activism. Elected member of Aosdana. Has four sons and six grandchildren.

"In 1980 Margaretta D'Arcy spent three months in Armagh prison after refusing to pay a court fine for taking part in a demonstration. Her account is always riveting to read: her fear, her admiration of what she sees as the dignity and discipline of the other women, and her occasional witty insights into her own emotional temperament." TIME OUT

"Always provocative, Arden and D'Arcy are two of the most creative people working in theatre today; uncompromising, sometimes awkward, often infuriating, but exhibiting an integrity that cannot be questioned." GALWAY ADVERTISER

"What else but a gutsy, variegated, significant and amusing book could be expected of playwright Margaretta?" Galway's feminist pirate radio which for ten years now has done everything it shouldn't. BOOKS IRELAND