Nameless Builders of the Transcontinental Railroad 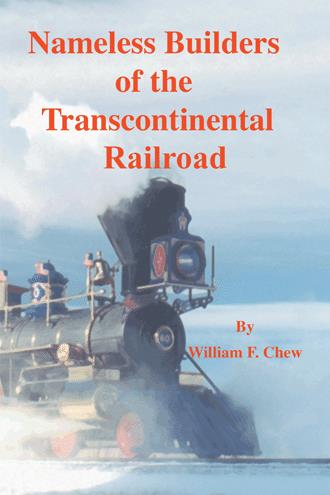 A historical study of the Chinese railroad workers using data from the Central Pacific Railroad Company payroll records dating from 1864 to 1867, correcting the first date of Chinese by the Central Pacific, and the total number of workers employed, with an explanation of how this estimate was calculated. Nearly one thousand workers are named, listing their wages and occupations, dispelling the notion that all Chinese workers were "coolies".

A synopsis is extrapolated from previously published works along with arguments for and against the data of some historical events, such as Bloomer Cut and Cape Horn. In addition, the building of the Summit Tunnels, and the laying of ten miles of track in one day are detailed. Particular focus is applied to the little known 1,330 Chinese fatalities which occurred while building the western route of the transcontinental, comparing these numbers to the total lives claimed by other major historical construction projects.

During his forty-five year career as an aerospace engineer, Chew designed and developed critical components for spacecraft travel. From the physical to the cerebral, grandfathers and grandson unwittingly contributed to the transportation industry within the wide range of their positions.

However, Chew's objective in writing this book, is to increase the public's awareness of this pivotal Chinese contribution to the development of America. e

Chinese by the Numbers

Research resulting from the payroll records of the Central Pacific Railroad Company becomes significant because it changes currently accepted historical data concerning the initial employment date and total number of the Chinese employed. The original records are archived in the basement of the California State Railroad Museum in Sacramento.1

The basic issues have, from time to time, raised several questions, which I hope to answer with my findings.

Employment of the First Chinese Workers

Four of the most popular books about the building of the Transcontinental Railroad overlooked documents that pointed to the exact date of the hiring of the first Chinese railroad workers.

In Chapter Seven, "The Central Pacific Attacks the Sierra-Nevada, 1865," Stephen E. Ambrose writes in Nothing Like It In The World:

In February, a month after Strobridge's all-but-fruitless call for labor, Charlie Crocker had met with him and raised the question of hiring Chinese. He said some twenty of them had worked, and worked well, on the Dutch Flat-Donner Lake Wagon Road. 2

However, the Central Pacific Payroll Sheets No. 26 and No. 34 dated January and February 1864, are the documents that record the first Chinese railroad workers, Hung Wah and Ah Toy,3 who supervised a crew of 23 unnamed workers.

Ah Toy was paid as railroad foreman at this time, and Hung Wah was the headman who later became a labor contractor known as the Hung Wah Company. These men worked for Division 2, Sections 30 and 31. Ah Toy, as headman, collected pay for himself in the amount of 24 man-days. Hung Wah collected pay for 588 man-days, which equals 23 men working an average of 26 days per month, thus adding 24 men who were the first employees for the Central Pacific Railroad. This number differs slightly with Ambrose's number of 20, but the difference is insignificant.

Ambrose implies that the Chinese started working on the railroad in 1865, even though the payroll data shows that 23 Chinese workers were employed in 1864.

In April 1864, Payroll Record 43 again confirms continued Chinese employment because it shows that Hung Wah was paid for 130 man-days of labor, approximating a crew size of five men working on Division 4, Section 34.4 After the railhead reached present-day Roseville, lack of funds and materials stymied progress for the remaining months of 1864.

Ambrose was not alone in propagating a later starting date. Other authors also believed that the first Chinese workers were hired in the spring of 1865.

Griswold relates in Chapter "1865" of his book Work of Giants, that as Crocker and Strobridge were on the excavation site of a roadbed east of Newcastle, threatened by the workers who said they would quit unless they were paid more, Crocker suggested that Strobridge go over to Auburn and hire some Chinese men. Faced with insufficient white workers, and frustrated by their unreliable attendance, a reluctant Strobridge gave in to Crocker's suggestion and hired 50 Chinese. The date and title of this chapter "1865" implies and misleads one to believe that this is the first hiring of Chinese.5

Opinion of the Chinese as a viable workforce was beginning to shift in their favor. The first indication of this appears in a letter written on April 12, 1865, by Central Pacific's legal counsel Judge E.B. Crocker to his long time friend Cornelius Cole, who was retiring as a California congressman.

Cole writes, "A large part of our force are Chinese, and they prove nearly equal to white men, in the amount of labor they perform, and are far more reliable. No danger of strikes among them. We are training them to all kinds of labor, blasting, driving horses, handling rock, as well as the pick and shovel."6

Charlie Crocker realized the necessity to employ thousands of Chinese laborers. However, still doubting their value, "Strobridge objected because they 'were not masons.' Crocker countered that the Chinese had to their credit the greatest piece of masonry in the world -- the Great Wall."7 Crocker prevailed, as Payroll Sheet No. 102 dated March 1865 attests to the beginning of the mass hiring of Chinese workers, which, because of the widespread publicity given to this event, adds support to the misconception that this marked the first employment of the Chinese. This record showed 12 gang bosses collected pay for 730 workers. These numbers increased to 1,358 for April and 1,218 for May of 1865.

A logical assumption is that the 12-gang bosses, who are listed and named in the March 1865 payroll records, were among the first 21 workers for Ah Toy in January 1864, a year and three months earlier. As earlier workers of the Central Pacific, they gained enough experience to later become gang-bosses.

The identity of the first 20 Chinese workers relies on the time period and their residence near Auburn. Nearby Dutch Flat was the third largest Chinese settlement of that era. An unpublished research paper, "References to Chinese in Dutch Flat," by Douglas Ferrier,8 named Chinese workers who were listed in the 1860 and 1870 Federal Census and correlated with payroll records of the Central Pacific Railroad.

Had the census been taken before 1870, perhaps a higher number of Chinese would have correlated with a larger percentage of names in the payroll records because after the completion of the Transcontinental, most of the Chinese were laid off and moved out of the area.

How Many Chinese Worked for the Central Pacific?

It was the railroad's policy that a headman or labor contractor collected pay (in coins) for all the workers in his crew. George Kraus states in his article "Chinese Laborers and the Construction of the Central Pacific," that a method was used by the railroad company to count the total number of workers at the beginning of the morning shift, at lunch, and at the end of the shift to compare the total hours of wages turned in by the gang boss to prevent overpayment. It was said that one could not tell the difference between the Chinese and the Indian workers. Because of this policy it is improbable that the individual names of the actual laborers will ever be known.10

It is commonly reported that peak employme