An Anthology of Toronto's Black Storytellers 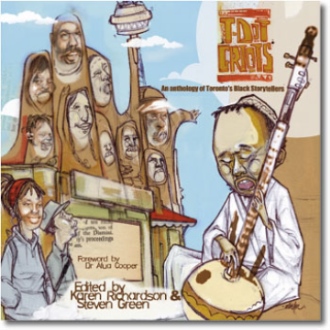 Birthed at the popular open-mic series, La Parole, T-Dot Griots is an intimate journey through previously undocumented Canadian experiences, reporting from Toronto's black communities in fiction, poetry, articles, plays and songs. The book features contributions by over forty writers of African descent, either raised in or residing in Toronto.

The griot is a West African storyteller, traditionally responsible for presiding over all of the important milestones in the life a community. T Dot Griots is a window into the communities occupied by black Canadian artists depicting their experiences living in the African diaspora. The griot carried the important function of preserving the community's history and culture through songs and recitations. Now transported across the Atlantic Ocean, non-traditional methods of expression emerge to document the existence of a little known group of people: the black community of Toronto.

Toronto is widely acknowledged as the world's most culturally diverse city. T Dot Griots was produced to portray the rich cultural diversity existing within its African communities. The anthology brings together spoken word poets and PhD's, hip hop artists and playwrights, students and professionals. The book voices issues of racial inequality and immigrant experiences. It illustrates numerous spiritual vantage points and political commentaries. Most of all it is an unapologetically accurate representation of an ever growing canon of writers making Toronto their home, who wish to acknowledge the many facets of African-Canadian identity.

Immerse yourself in the words, work and life of East, West and Southern Africans. Plunge into the hybridized dialect of Caribbean natives and descendents. Wade through generations of celebrated cast of Toronto's outspoken voices. Listen to the T Dot Griot tell the tale of the ages in a proudly Canadian style.