Mystery Of The 7 Colors Of The Rainbow

A Philosophic-theological Study from the Prophecies 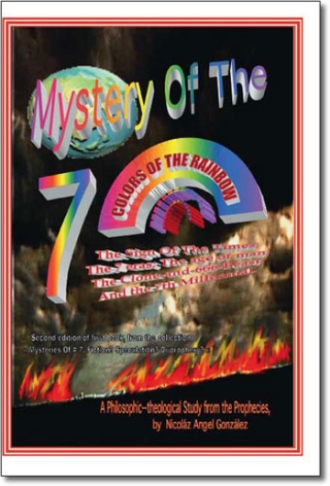 Dedicated and designed for all ages, societies and cultures, social groups, fraternal institutions, and for most religions, this second edition of the first book from the collection 'Mysteries Of # 7. Fiction? Speculation? Or Prophesy?' will teach you about a few interesting things you have never heard before.

"Mystery Of The 7 Colors Of The Rainbow" presents the rainbow such the Scriptures name it, "the token of the covenant (between God and men and all the creation) for perpetual generations" (or "... for perpetual centuries," as Spanish versions say [Genesis 9:12]).

This illustrative biblical textbook demonstrates that the rainbow is the symbol that shows mankind the different times of the earth. Just Apostle Luke confirms us about this, that God "has determined the times before appointed, and the bounds of their habitation" [Acts 17:26]. So being the rainbow the symbol of the times for/of all humans generations, it is obvious that its seven colors are symbolizing seven different eras for the whole time or pilgrimage of humans on the earth - and for the earth's existence because the Scriptures teach us that the earth will disappear too [Matthew 5:18; 24:35; 2 Peter 3:7-14].

In this study you are going to learn about each different era of the earth and their seven respective evolutional-predominant judgments; about the possible cause of extinction of the giant dinosaurs; about the age of man on the earth; the differences between the sons of God and The-Son-of-God; about of the future cloned-man and its most important details that incriminate him as the 666-Satan-man or the Beast. You will see here why we can say that the rainbow is the symbol of the seven eras - and the symbol of Jesus' Broken Life/Light-at The Cruz too.

Other still unknown things this interesting small book will teach you are the number of centuries from the first man until today's days, the number of generations from Adam to Jesus, and until today's days; the origin of the different languages, and human races; and other details of the seven eras of the earth and of the human being.

The fountain of inspiration to begin writing this collection was a prophetical illumination from the Lord, through His Word, for the González family's personal spiritual encounter with God and for the many years studying and assimilating His prophecies.

{If the Bible of your preference is another biblical version, please compare the same meaning from the version used in this book.}

When Nicolás received the illumination from The Creator regarding the seven colors' mystery he left in the Hand of the Lord the time God would be given him to publish this theme. Nicolás did not understand before why he received this revelation out of its publishing time, fifteen years before; but now he sees that they had needed these past few years to be praying to God and studying together in unity His Word, until receiving His complete Revelation and knowledge, in order to perfect this prophetical study through His Word, and to complete the verification of this truth.

Then once and for all, Gonzalez' family can see today that the time to reveal the "Mystery Of The 7 Colors Of The Rainbow" has already come.