The Last Refugees from Shansi

In the Hands of the Chinese Boxers (An Eyewitness Account) 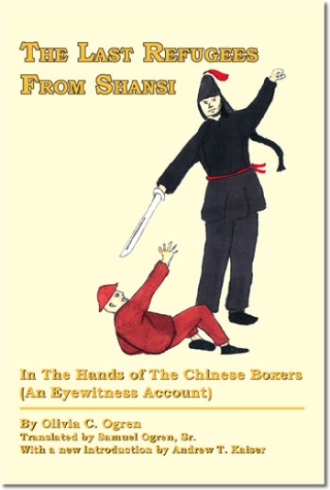 Olivia C. Ogren and her family were Swedish missionaries serving with the China Inland Mission during the fateful Boxer summer of 1900. Now available in English for the first time, this is her personal account of the trials and suffering they experienced as they fled from their mission in the northern Shansi town of Yongning. Beset by Boxer rebels, local bandits, starvation and sickness, the Ogren family would be asked to pay the ultimate price for their service to the people of Shansi.

"The whole situation had become extremely dangerous. One could hear the noise on the street. We realized that the people had become even more conscious of us as foreigners and we were the target of their deviltry. Drought and famine had been the threat to life in China from the beginning, so I cannot say it caused the Boxer Rebellion. Undoubtedly, the floods and famine of this time were two of the matches that ignited this holocaust. But there were other reasons and I will leave that to the historians. However, to tell what I heard, saw and experienced is another matter. That was too vivid and terrible for me ever to forget."

Samuel Ogren, Sr. (1899-1988) was born in China, as was his younger sister Ruth, to Swedish missionaries Olivia and Per Alfred Ogren. Their father died from wounds inflicted by the Boxers in 1900 during the Boxer Rebellion. Their mother, Olivia C. Ogren, wrote this book in 1901 recalling their harrowing escape from the Boxers.

Samuel Ogren, Sr. eventually settled in Delray Beach, Florida where he is believed to have been Delray's first registered architect. He maintained his practice from 1924 until 1950 when he semi-retired to Windermere, Florida. He designed numerous residential and commercial buildings, among which is the Delray High School designed and built in 1925. It was later placed on the National Register for Historical Places. It was restored and is part of what is known as Old School Square.