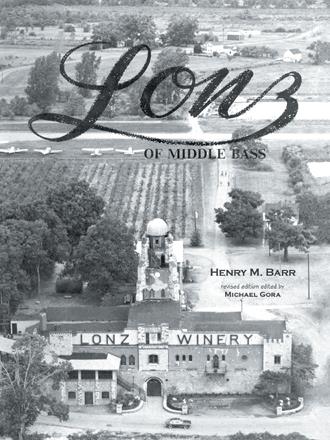 Lonz of Middle Bass is the story of a man, a woman, a building and an island. It is a unique book, particularly in view of the fact that it not only covers the obvious story of George Lonz and his wife, Fannie, but effectively chronicles the history not only of the Lonz Winery, but also of Middle Bass Island, Ohio from the earliest explorations of Champlain in 1545 through the mid-nineteenth century when the island, as it is known today, began to emerge.

The book is a reprint of the scarce and coveted 1982 edition, updated with an Appendix to cover the last 22 years. It also includes the stories from the August, 2000 Put-in-Bay Gazette about the tragedy in July, 2000, when the collapse of a terrace caused one fatality, injured many, and caused the winery to be closed for good earlier than planned.

The author of the original version, Mr. Barr, from the grandstand of 21 years of being "summer people", was intrigued with the island story from the beginning of his sojourn. He had an opportunity to know personally many of the people who were George's contemporaries or were a part of the story.

Bits and pieces of the chronicle found the author invading unexpected treasure troves. There was a trip to Toledo to talk with the Roesches about Indian artifacts, a luncheon with the Rameys in San Francisco to learn more of the Lonz husband-wife relationship, the gloomy interior of a New Orleans bookstore to find ancient maps of Lake Erie, and an antique shop in Charleston, South Carolina that reluctantly brought to light the plates of the Perry associates in the Battle of Lake Erie and the drawings of the Golden Eagle breaking ice. There were many, many phone calls to run down leads and a final visit to the Hayes Museum in Fremont, Ohio to find out about some of the island-owned boats.

For those who have enjoyed the unique hospitality as offered by this unusual winery, for those who enjoy history - particularly of Middle Bass Island, the Lake Erie Islands or the Lake Erie south shore - and for those who simply enjoy a bottle of wine in an idyllic setting, this book will be interesting reading.

Michael Gora is the Middle Bass Island Historian for the Lake Erie Islands Historical Society, and also operates the Middle Bass Island web site. A long-time summer resident, his goal is to spend more time on the island every year. A retired software executive, software developer and physicist, he is the author of over 30 technical papers and three technical books, and has also produced four reprints of Lake Erie Islands historical booklets. He is also the editor of the most complete history of the islands ever published, Lake Erie Islands - Sketches and Stories, which is available from Trafford.