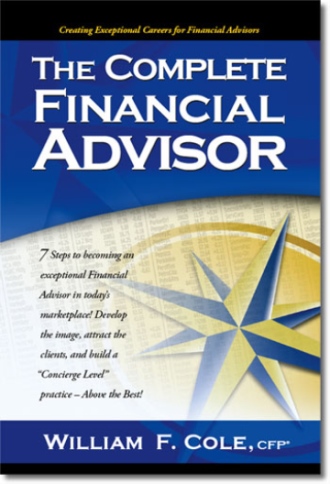 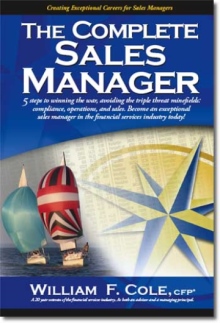 This book can help you become a better advisor today! The book discusses the 3 primary steps in building a million dollar practice-the advisor, the client, and the practice-and the keys to gaining the rewards a career as an advisor can bring. As an advisor you need to be in the right channel for your personality and selling style; when prospecting, you need to know what type of client to look for, where they are, and what attracts them to an advisor, and then you need to build the office/practice environment that the high net worth client expects- "The Concierge Level practice"!

The book also discusses marketing strategies, referral strategies, and professional designations. Get "in the zone", revitalize and reenergize your career, and look forward to getting to work each and every day!

Don't be part of the more than 80% of advisors that fail after 4 years and start being part of the top 20% that succeed! Get the rewards from life that you deserve with a successful career as a Complete Financial Advisor!

Business franchises succeed and go it alone small business fail because of one factor- they have a business plan and they "don't wing it!" This book gives today's advisor a business plan for success! Stop "winging it" and become a Complete Financial Advisor today!

My journey towards becoming a financial advisor began in January of 1985 and spanned over 20 years as both an advisor and a manager. I worked in all 3 major channels of distribution- the wire house, the independent, and the bank brokerage- and in small, medium, and large demographic markets. I hold or have held the following licenses: NYSE Series 8, NASD Series 4, 7, 24, 53, 66, and various state life/health/ and variable annuity licenses-I've been there!

As a former helicopter pilot in the US Army, flying Ònap of the earthÓ missions in an attack helicopter company, I knew that I needed an exciting new career to keep me going. I was searching for a career path in an industry that would allow me to work hard and get paid hard. I also wanted a career field where I could help others achieve a measure of success in their own lives. The thought of teaching and helping others, through financial advice, was very appealing to me. I began my career with a mid west regional brokerage firm not headquartered in Wall Street. I particularly liked the attitude they had in their training in that there was no one right way to present or sell, but many ways to do it. The key seemed to be to observe and study the various ways and methods of selling and presenting and decide on the one that was natural and comfortable for you. In my first year of selling, I achieved a company milestone in production and the office was awarded a bonus based on my first year production. This was the first time an office trainee had gotten this recognition for the office and I entered the branch manager training program with them, completing the NYSE series 8 program. Seminar presentations became the cornerstone of my business model. A newsletter became another cornerstone of my marketing plan. The newsletter evolved into a weekly column in the local Sunday newspaper. Another tool of marketing that I used was a new tool, the audio business card developed by Steve Anderson, known as the "cold calling cowboy".

I survived the crash in October of 1987 and later went into business with another partner as an independent financial planner. I completed my certification as a financial planner in 1991 while activated in support of Operation Desert Storm/Desert Shield. In 1994, I entered the bank brokerage market via a regional bank. I eventually moved to another regional bank and became the state investment officer for that bank. From there, I moved to a top 10 bank brokerage program and was a regional sales manager, both in small and large markets. The idea to become a sales coach and personal trainer was founded on the belief that I really enjoyed coaching individuals and getting them to achieve higher success in their life. I enjoyed getting them on the path of possibilities and making them believe that they are capable of doing more than they thought they could do and enjoy watching them and their success. I think the epiphany came in April of 2005 when I attended a Zig Ziglar workshop. One of the speakers said, "Éif you can't and don't recognize the land of opportunity you have here in America, you need to pack your bags and get off the planet because there is no greater land of opportunity than there is here in the United States of America." As a manager that has interviewed untold numbers of candidates for financial advisor type positions, if there is one quality that they have to have that I can't put in nor any other sales coach can put in, and that is theyÔve got to have a fire, a drive, and a desire to want to do better financially and for the themselves and their loved ones. You've got to have the desire and the fire. Everything else can be taught and learned, but you've got to have that strong inner desire and want to do it.

It is my sincere hope that my over 20 years experience in the financial services market, both in the wire house, the independent, and in the bank brokerage environment and as both an advisor and a manager, will benefit you in moving your career to the next level.