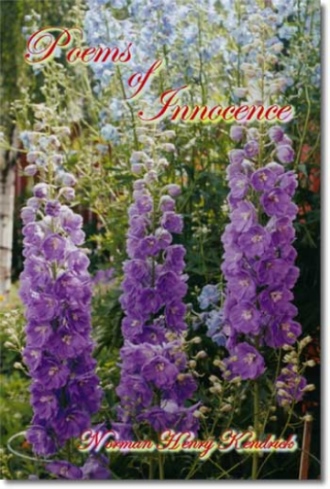 At last, we have a new book of poems for readers with an open mind - a wide-open mind.

If you have always been a poetry buff, then I envy you your first reading of, Poems of Innocence. You will feel your mind gently moved to places that you never dreamt of visiting. Poems which at first seem innocent, to the dreamer's eye, open up layer by layer, when experienced by the more sophisticated reader.

If you happen to be a prude, and pretend an innocence that you don't possess; if you are a snob, and never lower your standards to read 'lesser' books; if you are religious, and swear never to read anything irreligious; if you find life to be an excruciating bore, while sipping that glass of vintage wine; if you think that poetry is trivial - not for real men then, Poems of Innocence is definitely for you too. Imagine the fun you'll have reading it. No-one will ever know!

Norman Henry Kendrick will take you on a journey through time and space, with an unexpected sense of deja-vu. You will think, dream, envy, desire, dread, hesitate, agree, disagree, doubt, wonder - and you can even ask a friend.

Visit an English village, ancient Britain, the age of dinosaurs, heaven, Rome, Tuscany, Calabria, Sicily, Spain, Malta, the Rocky Mountains, Calgary, the foothills of Alberta, space, the ocean, the sky, or simply walk with Norman through a remarkable field.

Rub shoulders with the living, contemplate death, dream with Don Quixote, reflect on Einstein, go to war, drift through oceans, look over the Pope's shoulder, have some advice for God, and experience the beginning of a new universe.

Poems of Innocence, by Norman Henry Kendrick, is not for the faint-of-heart. But if you have a big heart, then these fascinating poems are for you. 'Take my hand... And I will let you see all the good things...'

Norman Henry Kendrick was born in the village of Southwick, now part of the city of Sunderland in the county of Durham, in the North-East of England.

His father, a Liverpudlian of Scottish blood, was a petty officer, gunnery, in the Royal Navy from the age of 15 and saw action in the North Atlantic and with the Russian and Malta convoys.

His mother was a busy housewife, with three sons and an absent husband. She came from a long line of respected clairvoyants and was active in the spiritualist church.

His grandfather, on his mother's side, became a coal-miner, from necessity, at the tender age of nine and, with determination and tenacity, became very well self-educated, sharing his knowledge with his grand-children.

Norman grew up, during World War II, to the sound of riveter's hammers and the flash of welding arcs from the numerous, war-driven shipyards of the river Wear, with the resulting intense, industrial pollution and smog.

In the background was the constant, throbbing hum from the busy Wearmouth Colliery as it fuelled the war industry. At night, he was kept awake by the menacing drone of hundreds of Nazi bombers, flying overhead to terrible destinations. On their return, dropping their remaining bombs on the town.

Yet, less than a mile away, the lush, green countryside began, reaching north across Durham, Northumberland and the wide-open spaces of Scotland. Excellent cycling country.

He became an apprentice, studied at night-school three nights a week, studied music, pianoforte, on the other nights and at weekends, walked and cycled to keep fit and eventually worked as a Marine Engineer, both on land and sea, then as a teacher. This wasn't exceptional as most of his friends were working, and playing, just as hard, meeting the challenge of the post-war world.

He will always love the area where he was born: Hadrian's Wall, the wind-swept, heather-covered moors of the Brontes, Wordsworth's Lake District, Burns country - just over the border, the Viking-haunted coast-line, the ruined abbeys, the castles, the towering cathedrals with their beautiful, choral music and especially the warm, friendly people of the North of England.

Norman, his wife, Imogene - a State Registered Nurse caring for the severely injured coal miners and shipyard workers in the Monkwearmouth Orthopaedic and Accident Hospital - who shares his love of music, literature, drama and travel, and their three sons and grand-daughter, now live in Calgary, Alberta, Canada, close to the beautiful Rocky Mountains, where they have lived, and worked, since 1969.