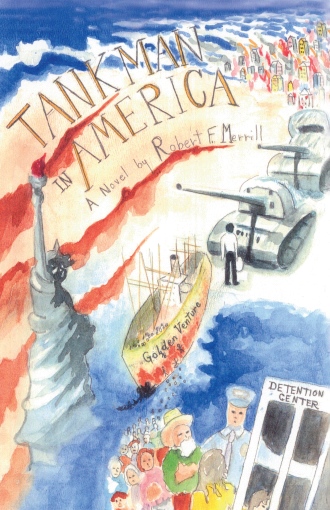 Idealistic school teacher Ellen is bowled over by news that many of the survivors of the shipwrecked Golden Venture, run aground off the coast of New York in 1993, will be detained in her local York County Prison in York, PA.

Upon attending vigils on behalf of these INS detainees now seeking political asylum, she becomes enthralled with the group of humanitarians she meets as well as with the cause of justice and freedom for the world's oppressed and downtrodden.

On the other hand, her husband Dan is not the least enthralled with her involvement in this cause of "cutting illegals a break." Major problems develop on the home front, all the more so as their daughter Christi becomes drawn into the cause.

Little does Ellen or the INS realize until the very end, but the detainee to whom Ellen has been assigned as his "Guardian Angel" is none other than the 20th century's most famous freedom icon: Tankman, the man who stood up to the tanks at Tiananmen Square.

Tankman in America encapsulates the tragedies, both personal and national, that have been and are the result of America's often misguided treatment of people seeking asylum from this world's many oppressive regimes.

Tankman in America is a story of great heroism, nobility, anguish, tragedy and joy. It is a thought-provoking, heart-breaking, inspiring and powerful story about the course of freedom in America.

Tankman in America is a novel based upon Rod's involvement with an asylum seeker support group since 1993, at which time a group of INS detainees from the ship-wrecked Golden Venture illegally bearing said undocumented persons from China, was brought to York County Prison.

His self-appointed role as part of the support group was to write freedom songs which he would sing at the weekly Sunday vigils. The detention and vigils went on more than four years.

Though the detainees couldn't hear his music from inside York County Prison, Rod had the feeling his songs of freedom had a certain power and that he shouldn't give up on them.

In 2001 he put out a CD of his favorite original freedom songs, Where is the Freedom? This CD can be obtained online at www.cdbaby.com/cd/robertmerrill

His favorite activities are: playing with his grandchildren; playing his stringed instruments; playing his racquet sports; reading and enjoying literature primarily in various foreign languages; playing bridge or Scrabble; writing; pursuing spiritual insight; being together with his extended family; hanging out at hunting and fishing camp; doing puzzles; picking up litter, doing yard work or small house projects, and doing the dishes.

He sings as a Hospice volunteer at nursing homes.

He is against all forms of brainwashing, whether religious or jingoistic.

He believes all people should live in freedom.