A New Way of Thinking About Time and Space 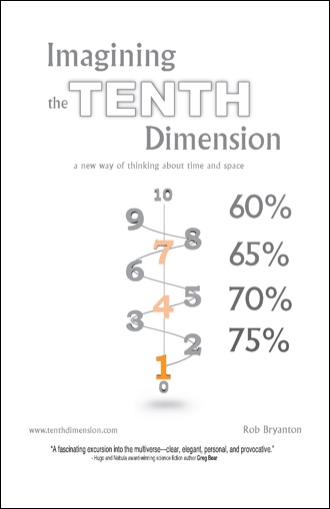 Reality, today's physicists tell us, is created by the vibrations of exquisitely tiny superstrings in ten spatial dimensions. Ten dimensions? Most of us have barely gotten used to the idea that there are four.

Using simple geometry and an easygoing writing style, author Rob Bryanton starts with the lower dimensions that we are all familiar with, then uses those concepts to build one layer upon another, ultimately arriving at a way of imagining the tenth dimension.

Part scientific exploration, part philosophy, this unique book touches upon such diverse topics as dark matter, Feynman's "sum over paths", the quantum observer, and the soul. It is aimed at anyone interested in leading-edge theories about cosmology and the nature of reality, but it is not about mainstream physics. Rather, Imagining the Tenth Dimension is a mind-expanding exercise that could change the way you view this incredible universe in which we live.

Rob Bryanton made his first record at twelve, and was host of a regional CBC-TV music series at twenty. He is the President of Talking Dog Studios (www.talkingdogstudios.com) in Regina, Saskatchewan, Canada, which specializes in music and sound for film and television. He has been nominated eight times in the last eight years for Canada's prestigious Gemini Awards, four times in the category ÒBest Original Music Score for a Dramatic SeriesÓ, and four times for ÒBest Sound for a Dramatic ProgramÓ. Recent projects to which Rob has contributed his talents as a composer and sound mixer include the hugely popular CTV series ÒCorner GasÓ, plus the historical mini-series ÒPrairie Giant: The Tommy Douglas StoryÓ (CBC-TV). Rob is also responsible for the theme and underscoring on CBCÕs "Canadian Antiques Roadshow".

While Rob has had poems and song lyrics published in several anthologies over the past decade, ÒImagining the Tenth DimensionÓ is his first book. It represents the culmination of a lifelong fascination with science, philosophy, and the nature of reality which, as he tells in the book, began at the age of seven. Rob is also the current President of the Saskatchewan Motion Picture Association, and is an active volunteer in his community. A typical stubborn prairie boy, he is proud to have built a career for himself as a composer and sound mixer in his home town, and to have been a part of Saskatchewan's burgeoning film and television industry for the past 30 years.

Rob lives in Regina with his wife Gail and their dog Buddy. Gail and Rob have two sons, Todd and Mark.