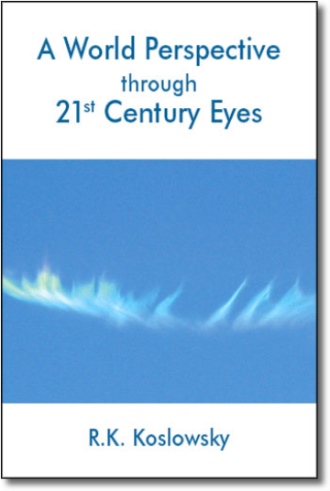 A World Perspective through 21st Century Eyes is not a history textbook or a science history book. It is not a treatise on philosophy or theology. Rather, it is a book on the major themes in the evolution of man and the impact of science thereto. It is a book with the major theme addressing the impact of science on society; one in which the technical community has not had time to digest and reflect upon during the past fifty years.

With the time pressures of the day and in the specializations in which we operate, there is precious little surplus energy available to us for leisure activity of our choosing. I trust that this treatment will sketch a broad outline that the scientific and technological community has had on society over the past five thousand years and potential areas where further impacts will be made in the next one hundred years.

To this effort, I believe the reader will find his or her surplus energy well spent. An engineer, to which my life's training was aimed, is expected to have a complete and thorough knowledge of some subjects. This is true for most of us in the technical community, therefore, it is also true that most of us choose not to write about many topics of which we are not master. I feel this separation of subjects and isolation of scientists and technologists does a disservice to others in other disciplines, who look for different views in order to maintain a balanced perspective on the myriad of issues confronting them each day.

Those of us who have grown-up in the Western Culture without a technical education may find this discussion exciting in the different way it is broached. Just as an engineer appreciates the beauty of the Golden Gate Bridge and the precision of the clock, the inspiration from watching the setting sun, reading a biblical passage or viewing a Bouguereau painting can motivate and enlighten that same engineer. In this way, I aim to provide the reader, either technical or non-technical, with an appreciation of the evolving world from the viewpoint of one who has been technically trained. I cannot reproduce the sunset, paint or sing to inspire, but I hope these insights motivate you to pause and consider your area of expertise, with the aim for you to contribute that which has inspired and motivated you.

Robert Karl Koslowsky was born a baby boomer in Lexington, Missouri. He moved with his parents at an early age to Canada where he was raised. He graduated from the University of Manitoba in 1981 with a degree in Electrical Engineering.

Rob gained valuable work experience with Petro-Canada on the Athabasca Tar Sands project. He also spent 17 years in the corporate high technology field of optical fiber transmission with Nortel Networks both in Canada and the United States. Rob left this environment in 1998 for the entrepreneurial start up world of 'Telecom Valley' in Northern California. There, he was Marketing Director for Cerent Corporation and drove the introduction of the Multi-Service Provisioning Platforms (MSPPs) that have become standard transmission solutions in the first decade of the 21st Century.

Cerent was aquired by Cisco Systems and Rob completed his commitment to introduce the complementary MSSP and MSTP solutions that are now gaining market acceptance.

Rob is a member of IEEE and recently completed studies in Oxford, England. Rob participates in a variety of multi- disciplinary conferences and seminars. Rob is now working on another book related to business and innovation. He lives with his wife and family in California.

Concurrent with the release of the book is the availability of Rob's Newsletter, A World Perspective. It extends the stimulating ideas contained therein and adds further insight to may of the ideas found in A World Perspective through 21st Century Eyes. With the time constraints of our waking hours, that this monthly summary will reinforce and amplify specific scientific and technological issues that the reader can readily digest. Please contact Rob at rkkrkk@aol.com to subscribe, with a complimentary first month's issue. Further details can be found at Rob's web site at http://worldperspective.bravehost.com/

Reviews and Excerpts and more Information

I appreciated every chapter for its stimulating and thought provoking insights.
Ron Otke, Retired, British Columbia

I felt I'd read something worthwhile...and I was impressed by the amount of work it must have taken to write.
Kim Dayem, Manchester, England "You have raised some important and stimulating ideas, and you have written in a style that is eminently readable." - Alison J. Hinnenberg, Professor, Santa Rosa Junior College

"I found A World Perspective through 21st Century Eyes extremely thought provoking and interesting. It is well researched and written in a style that is easily comprehended but never patronizing." - Wayne O'Neill, British Columbia

"It is difficult for individuals to appreciate this view of history and coverage of technology. This ambitous book by Rob Koslowsky provides just that perspective." - Alex Kelly, P.E., Cisco Systems, Tennessee

"I truly admire you for your research, your innovative thinking, and for the discipline it must have taken to write A World Perspective through 21st Century Eyes." - Elaine Goldie, Vice-President, University of Manitoba, Winnipeg

A World Perspective through 21st Century Eyes by Rob Koslowsky is about the positive impact science and technology have had and continue to have on western society. The basic premise is that science has a positive impact when knowledge is shared, applications raise the overall quality of life, and energy consumption increases. Accessibly written for the non-specialist general reader, Koslowsky points out that we who live in an ever-increasing technological and science knowledge-based society will be committed to understanding at least one area of science; will need to be able to challenge the rationale of associations, corporations, and governments in order to insure association members, corporate shareholders, and the citizens of governments are best served with respect to themselves, their families, their communities, and the nation-states. Best of all, A World Perspective through 21st Century Eyes captures and showcases the essence of the biological, cultural, and technological evolutions of the human race over the past millennia. Highly recommended reading! - Midwest Book Review, February 2005

Rob recently made a guest appearance on 'conversations,' a show hosted by Robin Fahr in California's Tri-Valley area centered in Pleasanton. For a copy of the interview, please contact TV30 at 925-462-3030. Simply ask for the show produced on February 17, 2005 featuring Rob Koslowsky talking about 'A World Perpsective through 21st Century Eyes.' There is a nominal fee for the DVD.

Feedback from a recent talk on 'A World Perspective' was as follows: "I received lots of positive comments from your audience Feb 27th. We need more science talks - there is definitely an interest...Well done. - Penny Johnson, Pleasanton Library, California

Excerpt 1 from Chapter 9:
English institutions, in fact, became models for all of Europe as people moved from the age of faith to the age of reason...This transition started when Galileo challenged the Catholic Church on the grounds of scientific truth for Copernicus' sun-centered theory in 1616. Galileo believed that scientific truth must persuade while the Church believed that faith should dominate. In the end, Galileo's naivety of the politics of the issue resulted in his house arrest until he died in 1642. The effect of Galileo's trial and imprisonment was to put a complete stop to scientific inquiry in the south. Thus the scientific revolution moved to northern Europe where religious authority had been more effectively challenged by non-scientists such as Luther and Calvin. This enabled men like Kepler to turn Copernicus' general description of the sun-centered solar system into mathematical expressions and Newton to conceive and formulate universal gravitation and the laws of motion. Telescope and microscope opened up new frontiers of exploration by extending the human senses to see both farther and nearer.

Excerpt 2 from Chapter 12:
Practical science thrived in China and religious thought permeated India but a balance in civilization was not present. These two societies were unable to generate sufficient surplus energy across a wider population to produce the right balance between scientific inquiry for innovation and religious thought for motivation. In contrast, the Western World, born in Mesopotamia and Egypt, transformed by Greece, codified by Rome, nurtured by Byzantium and then reborn in Western Europe, struggled mightily for this balance between science and religion. Without such a balance, civilization cannot progress, and in fact, China and India did not progress.

Excerpt 3 from Chapter 40:
The legacy of the 'People's Century' is the rise of the individual, recognition of our ecosystem as our partner and the enabling power of science and technology to reinforce the balanced civilization of stability, fairness and cultural richness. And indeed, it is truly about the individual and his or her respect for another that took hold in the twentieth century. A society, a group of interacting individuals, cannot grow and advance, unless the contribution of one is challenged constructively by another and the resulting outcome being added to a previous outcome, while preparing for the next.