An Ecological Commentary on Human Utopia 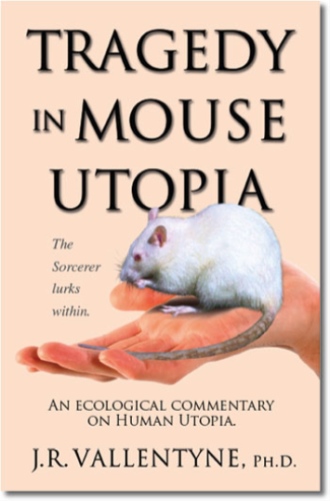 In 1968 John B. Calhoun, American behavioral ecologist, introduced eight mice into a technologically designed walled enclosure that fulfilled all the wants and needs of mice except migration in and out. Over a 4½ year period the population exploded into a colony of 2200 mice, and then slowly and inexorably declined to extinction. Deprived of motherly love early in life, and denied access to social roles later in life, young mice grew up without knowing how to behave as mice. This book examines whether a similar fate could be in store for Human Utopia.

Part I compares the suicidal effects of runaway growth in Mouse Utopia to a similar sequence of events in Human Utopia. Part II describes our dependence on the Biosphere. Part III shows how the runaway growth of technology and population is creating havoc in our species and the Biosphere. How an inner life-force symbolized as "the Sorcerer" causes populations to self-destruct by satisfying internal desires beyond their useful times. As the Sorcerer's apprentices, we have been preparing the ground for a crisis of crises beyond human control. Part IV describes how the Sorcerer works and how to control his destructive traits. Political, spiritual and behavioral opportunities are identified that could be overlooked, misinterpreted or ignored in steering a course toward coevolution of humanity and the Biosphere.

Johnny Biosphere: "This book is remedial reading fom some ecologists, most employees of enviornmental protection agencies, and most forward looking businessmen and politicians."

Muir: Dr. Vallentyne, you claim that the global course of "Human Utopia" since the 14th century has been following the 4½ year march to extinction of a mouse colony provided with everything that mice could want. You seem to dismiss the "magic of the marketplace". What about human innovation and invention? Men are not mice!

Vallentyne: My comparison is not between men and mice. It is between the behavior of mice and humans when both are driven to excesses by a runaway cycle of growth of technology and population. The marketplace accelerates the runaway cycle by feeding human desires rather than limiting human growth.

Muir: Yet another global treatise on this subject in addition to Malthus, The Club of Rome, and Global 2000??? Don't you think the public and political reaction will be to shrug and move on?

Vallentyne: Possibly, but I have added three new dimensions to the discussion: (1) a runaway cycle of intertwined growth of technology and population, jointly; (2) a change of context from an era of "upward causation" in which exponential growth is normal, to an era of "downward causation" in which continued growth is suicidal; and (3) the psychological-behavioral nature of the problem in both mice and humans. Malthus, it seems, is not yet entirely dead.

Muir: What makes you think that we may be on the brink of globally disastrous feedback from the Biosphere? I do not think that you are even close to evaluating the influence of different time scales in your analysis.

Muir: What do you have to say to the eternal optimist and the resigned pessimist?

Vallentyne: Nothing. Realists and pragmatists are needed.

Vallentyne: Nobody - except humanitarians, environmentalists, most women and all children.

Muir: Does our global technological society have to crash? Isn't it possible that human society will ignore your work?

Vallentyne: My book poses these questions, but does not presume to answer them. My aim has been to identify contexts and probabilities that shape the answers.

Muir: You describe "a Sorcerer within" as a mastermind of the cravings behind The Seven Deadly Sins. Isn't that just a little bit far-fetched?

Vallentyne: Not at all. The notion of the Sorcerer has more in common with our perceptions of reality than science or psychology can ever convey. naming the mastermind of the cravings could be key to controlling the Sins.

Muir: Given the inability of individuals to overcome the inertia and change the direction of politicians, how can you possibly conclude that our only real hope lies in faith?

Vallentyne: Faith is not unique to religion. It is inherent in the nature of life. As Dostoyevsky noted in The Brothers Karamazov: To a realist, faith does not arise form miracles; miracles arise from faith.

Muir: Has Calhoun's experiment ever been repeated?

Vallentyne: Yes, it is being repeated right now; in Human Utopia!! For an update on Human Utopia, read Scott Wooding's insightful book The Parenting Crisis.

John R. Vallentyne ("Dr. Jack", a.k.a. Johnny Biosphere) grew up on and in the Grand River in the outskirts of Brantford, Ontario. After an undergraduate degree in biology at Queen's University in Kingston, Ontario, he completed a Ph. D. degree at Yale under the direction of G. E. Hutchinson. He lectured in biology at Queen's from 1952 to 1958 and at Cornell from 1958 to 1966. In 1966 Dr. Jack moved back to Canada to help to establish new centers of freshwater research in Winnipeg, Manitoba, and Burlington, Ontario.

Dr.Jack served on the Editorial Board of a multi-million dollar investigation of Pollution in the Lower Great Lakes from 1966 to 1970. In 1978 he was instrumental in shifting the focus of the Great Lakes Water Quality Agreement from water quality to an ecosystem approach to water quality. As Canadian Co-Chair of the Great Lakes Science Advisory Board (1986-1992) he promoted the elimination of toxic chlorinated chemicals and an increased focus on human and biospheric health.

Among awards,Dr. Jack received the Journal Fund Silver Pen Award for Learned Publication 1955-1959, a Guggenheim Award for study in Italy in l964-65, the Rachel Carson Award of the Society of Enviornmental Toxicology and Chemistry in 1992, and a Lifetime Achievement Award of the American Society of Limnology and Oceanography in 2002. He has authored over 100 scientific publications including a 1974 book The Algal Bowl: Lakes and Man now available in revised and expanded form, co-authored with David W. Schindler and published by the University of Alberta Press as The Algal Bowl: Phosphorus and the Control of Eutrophication in Lakes.