*And Its Incredible Dream Experiment 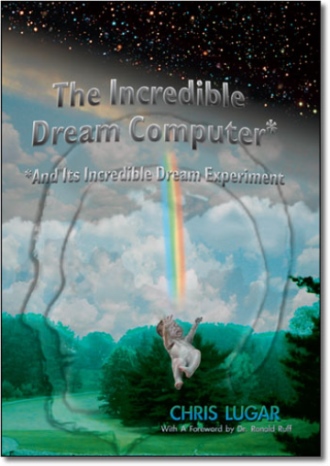 Few people are comfortable admitting they've been a guinea pig in a scientific experiment often beyond their control. In The Incredible Dream Computer, meet someone who has been a scientist performing such an experiment upon himself for a substantial part of his life. Musician and filmmaker Chris Lugar harvests his dreams using "cinekinetisynthesis," and more, to bring them vividly alive on this side of the wall of sleep he climbs over each time he goes there.

Discover the many processes of recovering dreams that Chris has come to recognize as the equivalent of the muse in each of us. This connection to something indescribably as delicious as it is good or bad is just the appetizer in a multi-layered storehouse of morsels to digest about dreams and dreaming. He explains through vibrant storytelling and songwriting (with a music CD included) what he believes the world needs now as much as love: better dreams. The Incredible Dream Computer patiently maps a course over a dreamtime of living and lifetime of dreaming, leading to how he has learned to do this in his own and shares it with the lives of others.

Examining himself under the microscope of self-analysis after an eighteen-year- long recovery from brain trauma and surgery, he finds the pathways not always pleasant, and the experiment never over. Chris isn't afraid to share that, if you aren't afraid to sojourn through the darkness as well as the light side of dreaming. You won't want to miss any of it.

Over thirty years of experience in the entertainment industry as a professional musician, laserist, and freelance film lighting technician alone have earned Chris Lugar the credentials to be a dreamer. With a background in engineering, stage lighting, live sound reinforcement, and production, bringing dreams to life has somehow always added to those credentials.

His ongoing Incredible Dream Experiment has sometimes been the cause of those dreams, and often, their resulting natural course. "Dreamsongs," included in this book, is one of those results. Some of his other original works can be heard on his solo album, "Through The Eyes Of A Stranger" (1997), and a collaborative acoustic effort, "Two Live Dogs-S.O.S." (2002).

Chris began his career in the 1970's as a rock musician, eventually growing into working sound and lighting stages for professional touring bands.

In the 1980's, he performed hundreds of Laserium shows, the ultimate dream art form, both in Pennsylvania and California. At the world's first IMAX dome theater in San Diego, he first began exploring the concepts of dream recovery and control. Engineering and building giant inflatables for advertising and Hollywood led him to cinematography, with film credits including Tim Robbins' political cult classic Bob Roberts (1992), Steven King's The Dark Half (1993), August Wilson's The Piano Lesson (1995), The Mothman Prophecies (2002), and dozens of local and national television commercials, movies, and shows.

When not involved with professional projects, Chris's time is devoted to his family, gardening, and developing new vegetarian recipes for everyone to enjoy.