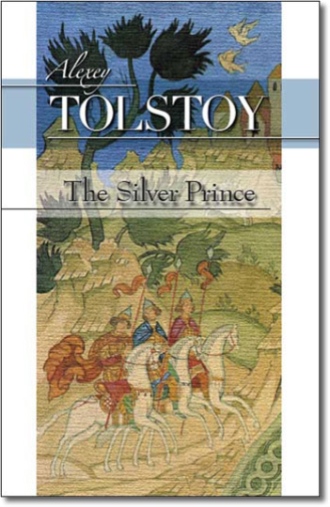 The novel begins in 1565, during the reign of Ivan the Terrible. The Czar had just instituted the ferocious policing force of social upstarts, the oprichnina, who wage Ivan's personal war of fear against the old boyar families of the Russian aristocracy. With virtues the quality of silver, the hero of this story, Prince Serebryany (which translates as 'silver'), returns to Russia from five years fighting at the Lithuanian front to find things quite changed. Ivan's paranoia is a perfect foil for Prince Serebryany's moral uprightness; never does he doubt the Czar's role, never does he step outside his moral code of honor, while Ivan irrationally calls for mass executions, sentencing to death anyone his advisors whisper to him about. Out of favor with the Czar after a conflict with the oprichnina, the prince flees Moscow and finds himself elected the leader of a band of outlaws.

The Silver Prince was Alexey Konstantinovich (commonly referred to as A. K.) Tolstoy's first full length novel. Best known as a poet and dramatist, Tolstoy (1817-1875) was a Romantic writer in the midst of the dominant Realist movement. However, the reading public in nineteenth century Russia, and still today, loved the novel for its dramatic scenes of outlaw and court life where greed and virtue collide, while contemporary writers, steeped in the tenets of Realist literature, disliked the very romance the public enjoyed. As a close confidant of the Empress Maria Alexandrovna, who shared his interest in mysticism, Tolstoy read parts of this novel to her while he wrote it; it is the only prose work he dedicated to her.

The first English translation appeared in 1892, under the title Prince Serebryany, then in 1927 as Prince of Outlaws. This translation was done for the sheer love of the story and its lively descriptions.

Nikita Sergeyevich Galitzine, 1912-2003 Count Aleksey Konstantinovich Tolstoy's The Silver Prince, originally written in the formal Russian of the educated elite among whom Tolstoy lived (the more famous Leo Tolstoy was a distant cousin), was translated by Nikita Sergeyevich Galitzine, himself a Russian-born aristocrat who left Russia as a boy with the title of "Prince." The Galitzine family traces its lineage to the 16th century, around the time in which The Silver Prince is set; Nikita Galitzine estimated that he would be about number 500 in a genealogy of princes Galitzine. The Silver Prince was translated in London, England, where the Galitzine family had sought refuge in the face of the Bolshevik army's victory.

Early in the year 1919, at the age of seven, the young Prince Galitzine's idyllic boyhood on a sugar beet estate in the Ukraine was uprooted. The Bolshevik army evacuated all nobility in the area to the Crimea, where the Dowager Empress hosted them on her estate near Yalta. From there, a party of eighty, comprising the members of the Romanov family who were still alive and a retinue of nobles that included eleven princesÑNikita Galitzine and his two younger brothers among themÑand eight princesses, were taken on the British battleship H. M. S. Marlborough to Malta in the Mediterranean. The three young Galitzine princes of course found the 1,500-mile voyage a great adventure, traveling through the Bosphorus, the Dardanelles, and the Aegean, with a call at Athens to see the Parthenon on the Acropolis. Shortly thereafter, the tides in Russia seemed to change in their favor, and the family returned to the Ukraine. However, soon after their arrival in the autumn of 1919, a much more violent Red victory required a desperate White retreat; the Galitzine family this time fled to the Crimea in a cattle truck of a slow train. Though in retrospect Galitzine realized it was a nightmare for his parents, for the young Galitzine boys, it was another adventure, "with bullets whistling past [them] when [they] got out at the frequent long stops." Eventually, they arrived in Constantinople. From Constantinople, the young Galitzine princes came under the influence of the British Consul who was responsible for their emigration to England. Prince Galitzine attended London University, then apprenticed to the Metropolitan-Vickers Company in Manchester where he was introduced to the field of thermodynamics. In 1939 Prince Galitzine and his brothers went abroad looking for adventure. Tantalized by tales of finding gold in the northern wilds of Canada, they embarked on the long journey to the interior of British Columbia, only to be seriously discouraged by a Mountie who was not keen on plunging into the bush after them on a rescue mission. Vancouver beckoned as safe and full of potential, though of course a potential not on par with the adventure of seeking gold in the wilderness.

That potential panned out in the onset of the second World War. Canada's National Research Council hired the eldest Prince Galitzine for his experience in thermodynamics engineering. His subsequent career in this field channeled his youthful thirst for adventure into jet engine research for which he became moderately well known in his field. He retired to Victoria, British Columbia with his wife Eve.

Prince Galitzine was a dedicated researcher in his personal as well as professional life. Producing volumes of writing, he investigated colour theory, geology, and aspects of history. His work includes numerous unpublished essays and various education tools, such as the World History Chart (World History Chart Publications, Victoria, BC), used by teachers and students around the world. His translations include De La Neuville's Muscovy 1682-1689, the French envoy's contemporary account of Russia during the minority of Peter the Great (1989), and Tolstoy's The Silver Prince.

The Silver Prince appealed to Prince Galitzine because of its historical detail combined with adventure, a combination that reflects his own life in some ways. Tolstoy's fascination with the Russian aristocracy is a relic of that aristocratic elite of which Prince Galitzine's generation was the last. In addition, the book was very popular among young Russian boys of his day. When he and his family were refugees living in Constantinople after 1919, Prince Galitzine was the age at which he might have first read it and possibly had it assigned for reading while he attended Russian school there. Russian men of the pre-Bolshevik generation remember reading it as children and will describe it with the nostalgic enthusiasm with which the English-speaking adults of the pre-war generation recall the fantastic adventures by J. Rider Haggard or Sir Arthur Conan Doyle. The violence of the action scenes, perhaps appearing tame to the modern reader, are conveyed through the Romantic tradition of rich description of archaic settings and dramatic interactions between characters that appeal to the adventurous youthful reader and that seem a meaty challenge to the adventurous translator. And that period when Ivan the Terrible's duplicitous behavior resulted in unfair and horrible judgments, seems now to correspond to the history by which Prince Galitzine's early life was so dramatically altered.

Finally, it cannot be a coincidence that Prince Galitzine chose as a title the literal translation of the hero's name. Where the other two translations have titles that either change the prince's name to a nickname, Prince of Thieves, or retain the hero's Russian name, Prince Serebryany, the silver to which his Russian name translates evokes very particular virtues. The Silver Prince is a hero who is honorable-solid, pure, trustworthy, and unswerving in his loyalties and faith, qualities central to Prince Galitzine's personal Christian, Orthodox faith. It is for these qualities that Prince Galitzine is remembered by friends and family