Life On The Mountain

(A Collection of Poems) 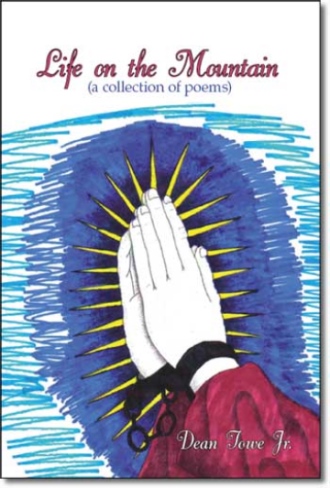 Life on the Mountain can be a peaceful and joyous place to be, but at times, it becomes stormy. We go through many struggles in our lives as Christians while we walk with Christ. Sometimes this walk takes us on a journey where we would rather not be. We must endure these times to get to the ultimate peace that we all long for. Although we do not understand the whys of the struggles that we must endure, the Lord's plan for our lives is different for each of us.

This collection of poems was written during times of joy, sadness, wonder, and understanding. They are inspirational and cover many aspects of ones life. They deal with holidays the begin with Easter and go through to Christmas. They are about just going to church to giving your life over to Christ. They also cover the love for amother to the death of a loved one.

While enjoying these poems you will laugh, cry, and shake your head in wonder. However, read them with not only an open mind, but also an open heart. May you feel the Lord's spirit move within you as you journey down Christ's road.

Somewhere around 1992 during a previous marriage, after surviving years of drug abuse and the rebellious lifestyle with all that it pertained, Dean decided to quit drugs, rededicate his life to Christ, and become an Ordained Baptist Minister

Unfortunately, his wife of twenty-five years was not ready to be a minister's wife. Although they stayed together for a few years after Dean became a minister, the road became very rocky.

Dean became the Chaplain of Prisoners for a local county jail in Missouri for nearly six years until his previous wife filed for a divorce. During that time though, Dean became close to the Lord and saw hundreds of men dedicate their lives to Christ.

Along with the jail ministry, Dean was involved in running a Christian recovery home for men to give them a new start in life.

Dean is currently living in Missouri with his current loving and Godly wife. Together they help raise awareness for Domestic Violence. As well as being involved in a motorcycle ministry that touches the lives of those individuals that seem to fall between the cracks of society because of the lifestyle they choose. They also have an emergency crisis fund available for the same.