The Banana Lady and Other Stories of Curious Behavior and Speech 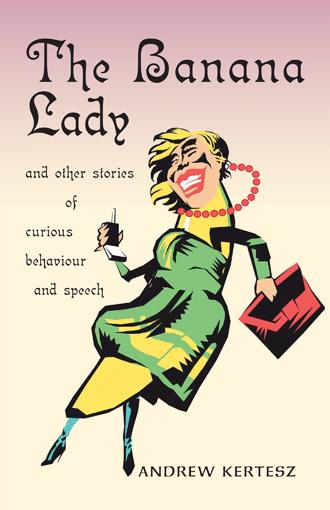 The subject of this book is a stranger than fiction change in personality, behaviors and relationships including the gradual loss of language and the meaning of words occurring in middle age.

These are stories about a relatively little known illness in middle age, that happens to be much more common than it is generally recognized. The exact cause remains a puzzle as with many other afflictions of the nervous system. but we are beginning to understand its anatomy, genetics, and biology. It is presently classified as one of the so-called "degenerative diseases" of the brain, progressively eroding either behaviors, professionals who diagnose and treat mental or neurological disease, and the caregivers who sometimes suffer as much as the patients if not more.

Technical jargon is avoided or explained when necessary. The stories are all factual, and each is chosen to represent one of the typical behaviors, but many of these are shared and reoccur throughout. The book can be read as a collection of neurological tales similar to Oliver Sacks' fascinating stories or as a case based guide for the puzzling phenomenology of Frontotemporal dementia, containing much clinical and scientific information.

Nineteen lives are chronicled as told by caregivers, each selected for the drama and strangeness of behavior or cognition. In each chapter the biology of the underlying brain disorder and the social and cultural aspects of the behavior change is explored. There is a special chapter: "Tips for caregivers" and three final chapters dealing with the biology, the genetics and pharmacology of the disease in lay terms. References, footnotes and glossary provide additional, but optional information.

He graduated from Queen's University in Kingston, Ontario, studied neurology in Toronto, and behavioral neurology in Boston. His publications deal with the classification, localization and recovery in aphasia, as well as alexia, apraxia, visual agnosia and dementia.

His books include Aphasia and Associated Disorders by Grune and Stratton (1979), Localization and Neuroimaging in Neuropsychology by Academic press (1994), and his most recent book, co-authored by Dr. David Munoz, is entitled, Pick's Disease and Pick Complex by Wiley-Liss Inc. (1998).

Recent research projects are the experimental treatment of Alzheimer's disease, mild cognitive impairment, vascular dementia, primary progressive aphasia, and frontotemoral dementia. He has standardized a Frontal Behavioral Inventory for the diagnosis of Frontotemporal dementia and is active in clinical trials.