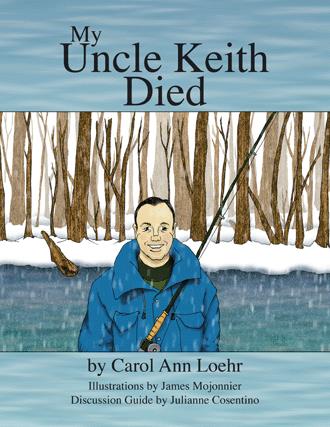 I didn't know my Uncle Keith very well because I was still young when he died, but my mother would always tell me stories about Uncle Keith.

I think I am like my Uncle Keith in many ways. Uncle Keith was always playing jokes on other--just like me. My mother said his dark eyes would twinkle like mine do when I am thinking about getting intos some mischief. I loved my Uncle Keith, and I wish he didn't die so young.

Recommended by The American Foundation for Suicide Prevention

The children's book, My Uncle Keith Died describes the symptoms of depression. It also helps children understand why a depressed person may not seek help. By reading Cody's questions and his mother's answers about his uncle's death, young readers will learn what to do if someone they know shows signs of depression. Early detection, intervention, and treatment for depression are critical for preventing suicides.

At the end of the book there is a discussion guide written by Julianne Cosentino, a licensed clinical social worker. This guide will deal with the type of questions children are likely to ask when their lives have been touched by suicide.

When Carol Ilijanich Loehr (BA’65) comes to Purdue University’s College of Education this fall, she’ll be talking about a topic few broach: suicide. The conversation will be personal as she shares the experience of losing her 29-year-old son Keith to suicide a decade ago.

“He was a high achiever in everything he did,” she says. Wherever he set a goal, he mastered it: Sports, outdoor adventures, travel, education and his medical industry career engaged the passions of the University of California biology graduate who also earned a master’s in marketing from Northwestern University. °He lived his life to such a fullness; his mother says. His death was a surprise and a shock, setting Loehr on a path of learning, then teaching about mental illness.

A former elementary school teacher, Loehr is passing on what she learned through her children’s took, “My Uncle Keith Died”. It’s the true tale of a I0-year-old boy’s questions - and the answers he got - when he asked his mother how his uncle died.

They’re interested in what Carol says in her book and what she will say on campus when she visits education classes. “The material in ‘My Uncle Keith Died’ is really good.” says Servaty-Seib. It includes information about depression, suicide and the idea of presenting a person who died by suicide as a ‘whole’ person, rather than just someone who was sick.”

In the book, which includes illustrations of the Loehr family by James Mojonnier, readers learn that Keith loved ice hockey, rowing, running and fly fishing. And he loved to joke around.

“Suicide does not discriminate” Servaty-Seib says “It can be an issue for any family, and I think There is a sense of that in this book, even though it is not directly stated in that way.”

When Cody asks in the story “Why didn’t Keith’s family and friends try to help him feel better?”, the reader learns what is often true. “Keith wanted to be strong… so he hid his feelings from us” Cody’s mother answers, “Keith always looked like he was happy. It was like he was wearing a mask to hide his feelings of sadness.”

Cody’s mother and the author’s niece, Julianne Cosentino, a clinical social worker and 1990 Purdue graduate, helps readers through her two-page discussion guide at the back of the book. That’s the goal, of course, to get people talking and learning.

Loehr began that dialog even before writing the book, through her website, www.thegiftofkeith.org. She’s continued it through various outreach activities, and this fall will realize one of her goals: working with future educators. Speaking to Purdue education students

Wachter Morris is scheduling Loehr to speak to her seminar in school counseling and is working to coordinate speaking times with colleagues in other education fields.

“It’s a very important topic for everyone in education to be knowledgeable about,” Wachter Morris says.”Some topics, and suicide is one of them, really scare people. It’s unsettling. Having someone besides me talk about the repercussions for families who have lost a loved one to suicide gives students another view of how they can work with people left behind or a student who has attempted suicide.”

Loehr’s personalized outreach is especially effective, Wachter Morris believes. “It helps de-stigmatize suicide. It helps the people left behind and it helps us understand the mindset of people who attempt or complete suicide. The only way to fix this is to help people understand, and she’s helping people connect with that piece.”