Prominence and other Mountain Measures 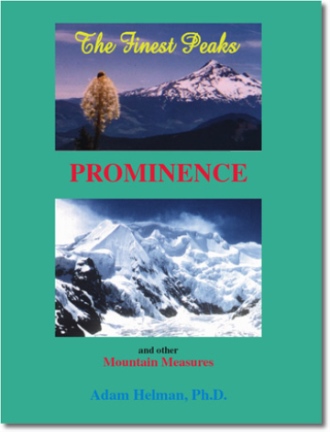 This book challenges the precedent that a mountain's worth scales with height. It is a rational synthesis of new concepts that compel one to reassess the popular "heightist mindset". The concept of prominence, loosely defined as a mountain's vertical relief, is a stiff competitor to summit height for assessing a mountain's stature and relative worth for innumerable purposes.

The community of prominence theoreticians, list builders, and climbers has reached critical mass - suggesting publication of a book dedicated exclusively to prominence.

Appendices A to G cover various subtopics, the glossary defines over 300 terms. 48 pages of illustrations are included, with full-color versions on-line at

A beautiful, hardcover edition with color illustrations is available, and is highly recommended by book reviewers. ?

E-mail the author for pricing and purchase information.

Adam Helman lives in San Diego, California and pursues climbing all year-round. Although he earned a doctorate in physical chemistry, for the past dozen years he has been a software designer and scientific programmer.

Upset with the growing lack of opportunities in Corporate America for creative, mathematically inclined people, Adam changed focus and struck out to use his considerable analytical skills, programming experience, and love of mountains by writing a book that leverages all three areas.

Instrumental in this regard was his best friend Edward Earl, also of San Diego. Edward has been a prominence expert for several years, and, with a similar educational background, wrote scientific software for the automated computation of prominence. They often climb together, be it in the Southern California desert or some peak in the Andes of South America.

When time and finances permit Adam organizes and participates in climbing expeditions to Latin America, his knowledge of Spanish being helpful. He is most pleased with an ascent of Nevado Illimani, Bolivia's most famous mountain, in May 2001 with Bob Packard (21,201 feet).

Adam Helman maintains a set of personal web pages. There is a mountaineering page with links to several climbing-oriented trip reports.

A detailed review of Adam's educational background and occupational history is available.