A Multigenerational Study of the First Whipple Family in America 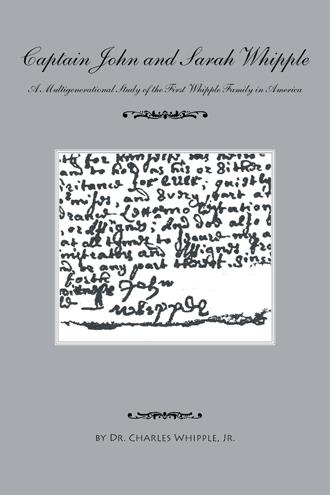 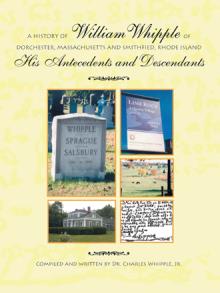 The first two volumes of the Whipples in America Series History and Genealogy of Elder John Whipple, and Fifteen Generations of Descendants of Matthew Whipple by Blaine Whipple, highlight the history of the Ipswich, Massachusetts, branches of the immense Whipple family tree. This third book chronicles the life and times of Captain John Whipple (1617-1685), who was born in Old England, immigrated to Dorchester, Massachusetts in 1632, then to Providence, Rhode Island in 1658/59. There is no known old world relationship between the teenager Captain John Whipple and the Ipswich brothers who arrived in the Bay Colony six years later. The first two generations of this family, which was composed of 13 members, including eight sons, spanned the years from 1617 to 1746. In-depth chapters on each family member are presented. These and later generations were prominent in New England history for over 250 years. Biographies of several members of later generations are offered. These include such personages as Commodore Abraham Whipple, Harvard University astronomer Fred Lawrence Whipple, Bishop Henry Whipple, Stephen Hopkins, signer of the Declaration of Independence, Nobel Prize winner in medicine G. Hoyt Whipple, and others. Those who wish to trace their lineage to the Mayflower, or to join similar social/historical/patriotic organizations, will likely find such proven links in this volume.

The narrative is copiously documented with over 600 End Notes, 55 photographs, many in color, as well as maps and drawings. Family historians, professional genealogists, and genealogical and historical societies alike will find this volume indispensable in a search to find connections to early Whipple and allies families.

Charles M. Whipple, Jr., Ph.D., Ed.D., Litt.D. is a retired university professor. He is the author of over a dozen books in the areas of psychology, education, and religion, as well as previous works in the social history genre, Sons and Daughters of Jesse, and A History of William Whipple. He continues to write books and scientific papers in retirement, conduct volunteer service to the community, and go on fishing trips with his two Whipple grandsons and great grandson. Dr. Whipple is a past president of the Oklahoma Psychological Association and the Oklahoma City Council of Churches. He is a member of the General Society of Mayflower Descendants, the First Families of Oklahoma Society, and the Oklahoma Genealogical Society.