by Fred A. Baughman Jr. & With Craig Hovey 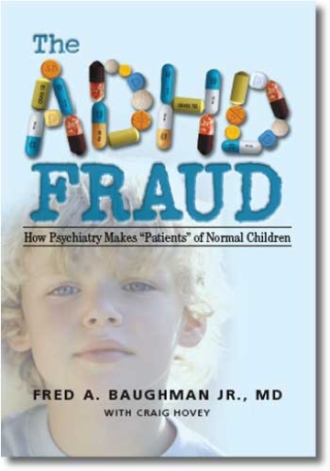 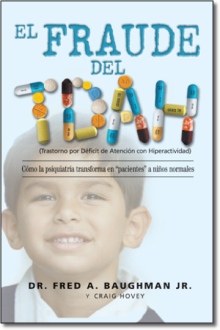 Fred A. Baughman Jr., MD is an adult and child neurologist who has made "disease" (brain tumor, multiple sclerosis, etc.) vs. "no disease" (emotional, psychiatric) diagnoses daily and has discovered and described real diseases. Herein he describes the difference between psychiatry/psychology, on the one hand, and neurology and all organic medicine, on the other, and why ADHD and all of psychiatry's "chemical imbalances" are not diseases at all--but fraud. Referring to psychiatry, he states: "They made a list of the most common symptoms of emotional discomfiture of children and in a stroke that could not be more devoid of science or Hippocratic motive-termed them " diseases"/ "chemical imbalances" each needing/requiring a "chemical balancer"- a pill." In 1970, when "hyperactivity"/"minimal brain damage" (forerunners of ADHD) was first represented to Congress to be a brain disease, only 150,000 had it. Today, not by science or truth, but the "big lie" -saying it is a disease often enough, 6 million have it! Nor is ADHD the only "chemical imbalance." They give us conduct disorder (CD), oppositional-defiant disorder (ODD), major depressive disorder (MDD), OCD, PTSD, GAD, SAD, etc., a total of 374 psychiatric disorders in the Diagnostic and Statistical Manual (DSM-IV-TR) of the American Psychiatric Association (APA), said to be "chemical imbalances" needing "chemical balancers" --pills! In 2003 Congressional hearings it was said that 17% of the nation's school children, 8.8 million, were labeled and drugged by psychiatry. Today it is 20%; one in five; over 10 million! How better to sew the seeds of our own destruction? As if this were not enough, the President's New Freedom Commission on Mental Health is set to foist compulsory, government-mandated, mental health screening on all 52 million US schoolchildren. When normal people are lied to, told they have a "disease" to make "patients" of them, their right to informed consent has been abrogated and they no longer live in a democracy. When, pursuant to that lie, they are drugged, what we have is not "treatment" but poisoning. This is the greatest health care fraud in modern medical history.

Fred A. Baughman, Jr. M.D., is an adult and child neurologist and a Fellow of the American Academy of Neurology. He has discovered and described real diseases. He has testified before Congress, the European Union, and the Parliament of Western Australia that ADHD and all claims that psychiatric diagnoses are diseases, are fraudulent. He has testified in legal cases regarding psychiatry's false claims of "chemical imbalances" and "diseases." He has appeared on national radio and television shows, and has authored over a hundred articles in medical journals and the lay press. He resides in San Diego, California with Annette, his wife of 45 years. He is the author/producer of the video ADHD--Total, 100% Fraud (1998), and is featured in The Drugging of our Children (a Gary Null Production, 2005--a dvd).