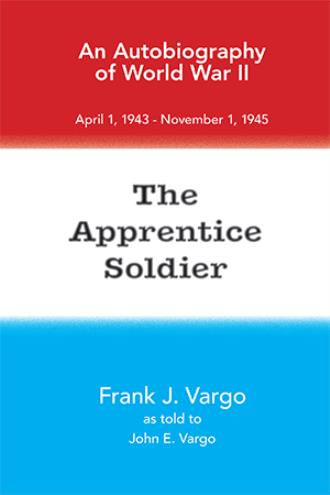 The Apprentice Soldier will bring the reader into a turbulent window of time in a young soldier’s life. A true story, it includes seven months of combat, sandwiched in with humor and two love affairs (one before D-Day and, by chance, in the 104 Army hospital in Louisville, KY).

The author is highly critical of the U.S. Army intelligence that did not foresee superior German infantry weaponry to include German tanks with high-powered .88 mm cannons.

As written, his Company L, 18th Regiment, First Infantry Division had two enemies, the Germans and the record-breaking winter of 1944-45.

He was given a field promotion to sergeant in the fall of 1944, where he commanded machine gun and mortar units until he was wounded January 18, 1945.

“This is the best firsthand account I have read from a soldier in World War II. If you want to know what it was like to be an American Infantryman in that war, then you need to read this book! It will become a classic.” - Colonel Edwin W. Chamberlain III, Honorary Colonel 18th Infantry Regiment, Author of Operation Desert Vengeance and Tripwire.

“Frank Vargo’s The Apprentice Soldier is a raw, honest, personal account of one soldier’s experience of the Second World War., with vivid details related in a pure and engaging voice. It is a beautiful and important artifact, and an irresistible read.” - James Patrick Guy II, Richmond VA.

I'm not a frequent reader, but The Apprentice Soldier was a book I could not put down.” - Michael Baran, Phoenix AZ.

After the war, Frank J. Vargo returned home to Cleveland and pursued his education at Fenn College (now Cleveland State University) and graduate work at George Washington University in Washington, D.C. He retired from the Department of Justice in 1985 and currently resides in Richmond, VA.