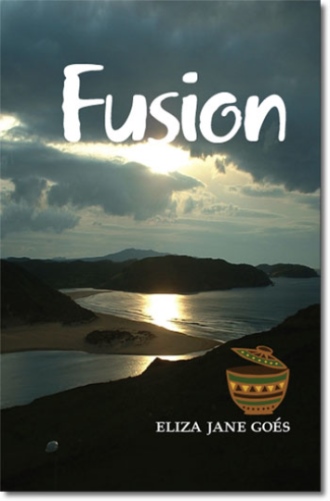 On one level Fusion is the story of 94 year old Gloria Hagberg, famous 'Granny of the Airlifts' of 1960s Kenya, waiting in the wings while the mixed race son of one of her protégés, Barack Obama, aims for the presidency of the USA.

On another level the story of ELLA MACKAY begins when she is six in remote 1953 Scotland. EWAN CAMERON inspirational sole teacher of 35 pupils instils a sense of justice and an understanding of human diversity. Ella goes to teach in 1968 Kenya, leaving her family traumatised. She lands in a kaleidoscopic society of multinational idealistic colleagues, earnest African schoolchildren, neo colonials, frightened Asians, religious zealots, corrupt politicians and Pan African Socialists.

Ella gets tangled up, via JOHN FRANCIS, nephew of the assassinated Pio Gama Pinto, in a dangerous plan to prevent the assassination of TOM MBOYA popular possible successor to the President. Ella helps to save Mboya's life then later meets him at the home of GLORIA HAGBERG. A huge secret is uncovered. MIKE KILPATRICK tempts Ella to consider life on a farm in post colonial Kenya. His sister NAN, maimed during Mau Mau, pulls at Ella's heartstrings. Both Mike and John propose to Ella but she returns to Scotland.

The story moves to 2006/7 with the reflections of an older Ella on how migration has and could contribute to cultural fusion.

Meantime Gloria is watching the USA Presidential campaign. If Obama wins it would be more than a triumph for fusion. It would be justice.

Eliza Jane Goés was born and brought up a very long time ago in Morayshire, Scotland and, although writing has always been part of her life, it has taken a very long time for her to get around to writing this, her first, novel. There are now two other novels on a similar theme in the pipeline.

The relevant life experiences which contributed fodder for Fusion include her inspiring early education, her studies of Philosophy, English Literature and Geography at Aberdeen University, nine years of teaching in Kenya and Zambia and a personal and working life in London which has been packed full of positive and enriching, cross cultural encounters.