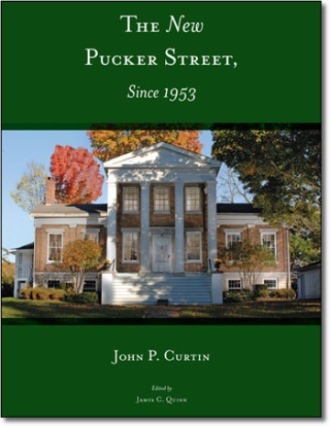 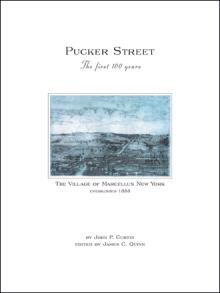 The New Pucker Street is a companion book to Pucker Street, the First 100 Years, and continues to document the civic activity of the community of Marcellus from 1953 to the present. On the cover is The Steadman House, recently dedicated as the home of the Marcellus Historical Society. Located in the heart of the Village, it not only provides a link to a precious past, but is a 19th century landmark that projects the community's commitment to civic improvement. It is an enduring symbol of the community's history, its strength and majesty, but also proclaims its presence in the 21st century. Its steps and pillars are inviting and announce to the world that Marcellus, while retaining its authenticity, is ever adapting to change, responsible change that is reflected in the lives and accomplishments of its citizens, young and senior.

The New Pucker Street documents many of the changes that have taken place in Marcellus since the celebration of the Village Centennial in 1953. In the last fifty years, the traditional picture of Marcellus as an agricultural and milling community changed. Many old homes and buildings in the Village have fallen to the wrecker's ball, while other landmarks have been remodeled to a former glory. As more families moved to the suburbs after the war, there would be an increase in the population, dramatically changing the make-up of the native people - and reflected particularly in the school population. In the next fifty years, the role of government would change, as more services would be provided, and an aging infrastructure required continuous consideration by elected representatives.

The next fifty years would see the emergence of the "greatest generation." When the young men returned to Marcellus after the war, they were joined by equally involved women of that generation, and in the words of former President George H. W. Bush, "did the work of democracy day by day, every day in their hometown," helping to build bridges to the 21st century - ones that their own children, grandchildren and great grandchildren would follow.

The New Pucker Street also details some of the issues facing an American village in modern times, and it also contains an epilogue, highlighting some lessons that might be learned from the past - ones that might serve as guidelines for what lies ahead.

The New Pucker Street portrays Marcellus like many small towns across America - as home - a place where many people have settled, and to which many people return. They return because it is home, and they always feel welcome.

Educated at Niagara University and the State University of New York, John P. Curtin spent 35 years teaching history in the Syracuse City School District and another 12 years employed by LeMoyne College in Syracuse, NY as a field supervisor of student teachers. First elected to the Marcellus Village Board of Trustees in 1995, he is now the Mayor of the Village, re-elected in 2014. He is also a Trustee of the Marcellus Historical Society and a Trustee of St. Francis Xavier Catholic Church in Marcellus. He and his wife, Maureen, have lived in their house on First Street in the Village for over forty years, where they raised their children to adulthood. As the parents of four grown children and the grandparents of twelve, they enjoy spending much time with them and their families. They also have a strong interest in family histories, many of which, including their own, span the history of the Village of Marcellus.