The Price of Truth 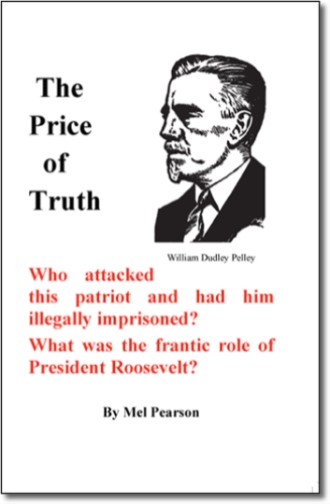 This is the story of the nation's most outstanding political prisoner during the Twentieth Century. It is the story of William Dudley Pelley, an American patriot, writer, publisher and organizer who was targeted by the most powerful and sinister forces entrenched in economic and political power, including President Franklin Roosevelt. They determined that he be silenced, no matter how illegal and brutal the actions to be employed against him.

During the 1930s he was the stormy petrel who wrote and organized against all legislation that was destroying the independence of the American people. He opposed all the steps leading to U.S. embroilment in World War II, a war that took the lives of 53 million people and one that he felt could have been prevented.

Mr. Pelley was persuaded to drop his lucrative fiction writing and launch a nation-wide campaign against the pervasive economic, financial and political exploitation.

The God of Carnage finally set the stage for the charge of "sedition." On August 12, 1942 he was sentenced to 15 years in prison. His accusers gloated in their success in silencing both his voice and pen.

In the eyes of his accusers his most serious "crime" was the publishing of his book "No More Hunger'. They were aware that its proposals if adopted would break their usurped power.

THE PRICE OF TRUTH covers the flagrant miscarriage of justice and persecution that took place against Mr. Pelley. The case should be a wake-up call for all Americans!

The author was born of Scandinavian parents on August 1, l916 in Lake of the Woods County, Minnesota. He graduated from High School in 1934 and forewent further formal education to assist his widowed mother and three other siblings to survive the trials of the Great Depression of the 1930s. In 1936 he became a member of William Dudley Pelley's organization "The Silver Legion" and was active in espousing the proposals contained in "No More Hunger". In 1943 he married Mr. Pelley's daughter, Adelaide, and during the 1940s they led a nation-wide campaign for her father's release from illegal imprisonment. In 1961, he and Adelaide, and his brother Walter, organized Aquila Press, Inc., and launched the monthly magazine "The Eagle's Eye", which focused on the corporate takeover of the nation's work capability and exertively promoted the proposals of a NATIONAL COOPERATIVE COMMONWEALTH. The author was an incorporator of "Soulcraft Fellowship, Inc." which published Mr. Pelley's many esoteric books and magazines. In 1969, the author wrote "Challenge to Crisis". In 1995, he wrote "There is a Way". And in 2003 he wrote "A Blueprint for Survival". Currently, he is working on his fifth book "Scourge of Cords" and his sixth book "A Reluctant Heretic" which are the writings of his life- long partner, Adelaide. The author, now 92 years young, resides in Noblesville, Indiana, with his feline partner, "Reeka".