Unification of Electromagnetism and Gravity 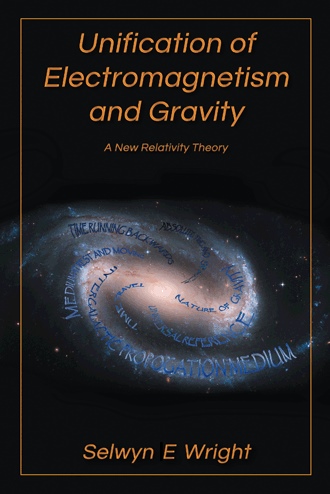 Einstein believed that electromagnetic (EM) waves (light) were somehow special; they did not require a propagation medium (ether) to propagate their disturbances, and that only relative motion between systems was important. This was Einstein’s big mistake. A New Relativity theory (NR) shows that all wave forms require a medium and that all motional effects are with respect to the propagation medium. NR describes a more comprehensive universe than Einstein’s Special (SR) and General (GR) Relativity. It predicts the same medium based measured properties as SR, predicts measured observations that SR cannot predict and removes the ether-less aspects of SR that cannot be measured. The new field theory removes the mysteries and paradoxes present in Einstein’s SR and GR. It describes a revised view of the universe, including gravity in a unified electrical framework. The theory restores the propagation medium (ether) for the transmission of electrical fields (light, gravity and inertial). It enables its wave equation to be causal (predictable), rather than the non causal relative motion between systems as Einstein believed. EM systems contract, both time rate and structure, passing through the propagation medium, whereas gravity attracts and compresses the medium, both time and space. All motional effects are caused through the interaction of moving systems (assemblies of atoms and molecules) with an electric field supported by the propagation medium. Whereas, Einstein’s ether-less relativity allows reversal of cause and effect without any justification. The new theory restores the link between classical and modern physics. It forges new links between electrical sources and observers in motion, and between electric fields and gravity. The medium provides the bridge between the Lorentz transform, accelerating frames, and gravity, providing a basis for the unification theory of the universe. The concepts are described in a simple physical manner with a minimum of mathematics. They simplify our understanding of the universe and challenge SR as a more logical and comprehensive theory.

In a Unification of Electromagnetism and Gravity, author Selwyn Wright describes his New Relativity (NR) theory in a simple physical way, in order to help the lay person to understand. At the same time he seeks to update aspects of modern physics in a rigorous manner. NR removes confusion in Einstein’s relativity, simplifies our understanding of the universe and challenges relativity as a more logical and comprehensive theory.

Motional electromagnetic (EM) and gravitational theories are shown to have two inherent deficiencies that have prevented them from becoming a unified theory. Firstly they do not recognize that the propagation medium (ether) is the essential thread that runs through these developments. Secondly they do not realise that EM waves and gravity are two forms of the same field - unsteady electric and steady difference electric fields. Wright’s new theory re-establishes a preferred frame of reference and restores the connection between classical and modern physics. It also forges new links between electrical sources and observers in motion and between electric fields and gravity.

As explained in the Unification of Electromagnetism and Gravity the medium provides the bridge between the Lorentz transform, accelerating frames and gravity, providing a basis for the unification theory of the universe.

Professor Selwyn Wright obtained his PhD in the ISVR at the University of Southampton in the UK. At Stanford University he was involved in establishing an Institute in Acoustic and Aeronautics at the NASA Ames Research Center. At the George Washington University he set up a postgraduate program in acoustics at the Langley Research Center. He was a Scientific Adviser to the French Government (ONERA). On retirement he was the Brook Hansen Professor and Chair of Engineering at a British University.