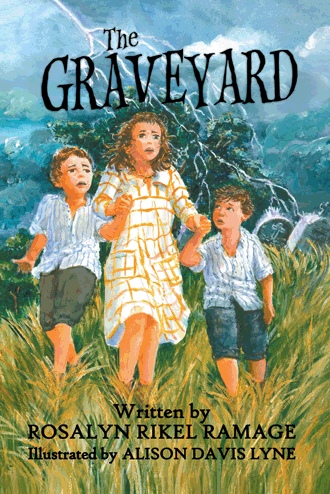 We stood there, silently, not believing our good fortune. Miss Stone began to write with a

special pen that she kept dipping into a little bottle of black ink. She did have beautiful

handwriting, with lots of swirls and curlicues. Her penmanship was one thing I had

"All right, children," she actually smiled at us again. "Take this note to your

parents. I feel certain I will never have to see you like this again. And that's that!" She

blotted the ink with a large ink blotter, folded the note in half, and handed it to me.

"Thank you, Miss Stone," I said in a small voice. "I'll see that they get this."
"I'm sure you will," she answered. "Now hurry on home before it starts to rain."
We quickly gathered our tablets and lunch pails and moved toward the door. I

glanced back one more time. Miss Stone was still sitting at her desk, peering over the top

of her glasses, and smiling after us.

"Thank you again, Miss Stone," I said.
"Thank you, ma'am," Edward added.
I nudged Fred. He looked up at me. I gestured with my head toward our teacher.

He looked back at her and echoed our words, "Thank you, Miss Stone, ma'am."

"I thought she looked pleased with herself. She nodded in our direction as we

hurried out the door.

Just as we stepped outside, another flash of lightning split the clouds. The storm

was closing in fast. We would have to hurry to get home before it hit.

We ran across the countryside, scampering down the creek bank, splashing

through the creek, then climbing up the bank on the other side. We only had to crawl

of the Singleton Field. I barely glanced at the nearby cemetery. We were almost home!

Big, fat raindrops began to fall, splattering as they landed on our heads. The smell

of rain filled the air. The storm closed in around us; the raindrops pelted harder. We were

running across the field when Edward slowed down a little. He yelled, "I was relieved to

"Sunny SLOOP?" I laughed. We slowed down to catch our breath. "That's funny,

Edward. You called our school Sunny SLOOP instead of Sunny SLOPE," I said. "I read

in a book just this afternoon about large ships that are called sloops, but I never thought

about Sunny Slope School being called Sunny Sloop." We all laughed about the new

name for our school. We grabbed each other's hands and started running again.

The wind was so strong by this time that the tall grass swirled in all directions.

The lightning and thunder were constant as the sky darkened even more. It was as if the

clouds were falling, wrapping themselves around us. Still holding hands, we ran even

faster in the downpour of rain. It was frightening!

And then it happened. Just as we got to the center of the field nearest the

graveyard, for some reason we all slowed down again and the three of us said the words

"Sunny Sloop" at the same time. At that exact instant there was a brilliant flash of

lightning that lit up the nearby tombstones like fireworks. At the same time there was a

I thought we had been struck by the lightning, but instead, we were suddenly

We looked around. We were still holding hands and getting soaked to the skin,

but the ground seemed to be moving. It was rocking up, pausing, then suddenly rocking

Are we dead? I thought. Are we in heaven? I looked at both my brothers.
There was another crash of thunder and the same action began to take place under

out feet—up, up, up. It seemed as if we would fall over for a moment, so steep was the

incline. Then came the pause before going back down, down, down.

Why, we weren't in heaven at all. But neither were we standing near the graveyard

in the middle of the Singleton Field. We were on board a large ship! Huge sails billowed

above our heads. Sailors dashed around the deck, yelling directions at each other. Some

were pulling on ropes and lowering sails. Everybody seemed to be hurrying. There was a

feeling of panic in their actions.

As we looked around in bewilderment, the same motion began again, up and up,

until we almost fell over before there was a pause, and a quick descent back down again.

But this time a large wave came crashing onto the deck. The powerful wave pushed us

ahead of it. We grabbed each other and held tightly. The thunder boomed.

"What's happening?" I yelled. "Where are we?"
"You're askin' us?" Edward yelled back. We could hardly hear each other's voices,

so loud was the crashing of thunder, wind and wave. "You're the big sister! You tell us!"

"I'm afraid, Emma Mae. Hold me," Fred cried.
Just then another wave came crashing over the side of the ship. It was such a large

wave that it knocked us down. We were swept across the deck in the churning water. It

us in his big, strong arms, holding us tightly.

He yelled something to us, gesturing for us to go toward a cabin on the ship. We

we could understand his gestures. He helped us run across the wet, slippery deck.

We got to the cabin door just as another wave churned onto the deck. The door

opened and strong arms pulled us inside, into the safety of the cabin. 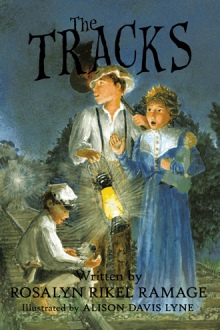 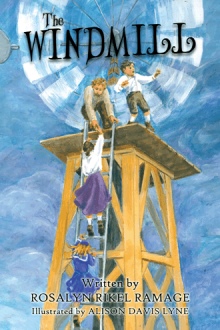 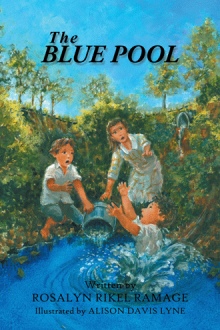 1914, rural West Kentucky. Twelve-year-old Emma Mae, ten-year-old Edward, and their seven-year-old brother Fred dash from their one-room school at Sunny Slope during a thunderstorm. Suddenly, as they run past the graveyard near their home, there is a close lightning flash. In an instant, they find that they have traveled back through time and are now on board a large clipper ship filled with passengers who are en route from Germany to America. What adventures and perils await them on board this ship? What will they have to do to be miraculously returned to their own home and family? And what will become of them if they don’t find the way back home?

Rosalyn Rikel Ramage is the author of two books of children’s poetry and a middle-grade mystery entitled The Tracks. She is a retired elementary school teacher whose love of children and family has inspired her to incorporate bits of family lore with fantastical adventures. She hopes her books will enlighten as well as entertain her audience—middle school through persons of any age. She and her husband Don split their time between their farm in Kentucky and their home in Nashville, Tennessee.