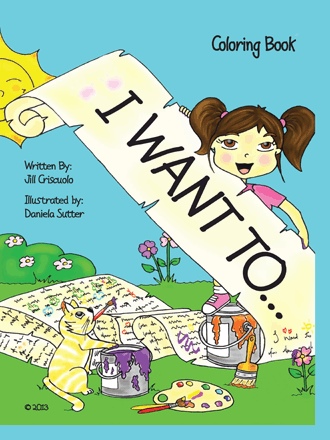 This was hit in error, there is no update Your Free Preview update was successful!

Hi, everyone! My name is Jill Criscuolo, but my friends call me Jilly! I use my imagination to see wonderful things, which helps me to sing, write, and act. This book is for all children of the world that say “I want to, I want to,” as a children’s mind is endless and beautiful. The girl in the book, Frankie, uses her imagination to show us that children can learn to love themselves and their dreams can really come true. Our society today doesn’t allow this generation to learn who they really are and to use their imagination when they are alone. The colorful pictures will encourage the reader to feel like they are actually with Frankie. I also created a coloring book to allow the children’s imagination make the colors in their own minds come to life. My mission is to create books that will entice young readers to read more and more. There is always room to learn and imagine whatever age you are! I hope to see you on my next adventure! Imagine that! Love, Jilly

JILL CRISCUOLO – Short Bio Jill Criscuolo is an emerging author with creative talents stretching over a multidimensional career encompassing music, television, and writing. She is the recipient of multiple awards and nominations as a singer-songwriter. The West Orange, New Jersey, native makes her book-publishing debut as an author with the launch of her children’s book I Want To. This is the first in what will be a series revolving around the story’s main character, Frankie, an adventurous, curious little girl. The idea to create the book began developing several years ago but was sidelined as Jill continued her music and acting projects. Writing has been something she has enjoyed since starting grade school. It began with her penning a story, “The World of Dolls,” which was inspired by her mom’s collection of dolls from around the world. Jilly, as she’s known to family and friends, fondly remembers getting her first library card, which gave access to an unlimited amount of books and expanded her awareness. Over the years, her innate curiosity, coupled with an active vivid imagination, enabled the shaping of countless stories, poems, and songs. Jill has compiled and composed a collection of stimulating, entertaining, intriguing, and whimsical projects to bring to the forefront. She is never one to lack ideas; her other present ventures are writing screenplays, developing concepts for her videos, and creating storyboards for varied entertainment projects for her production company. “I consider myself an unconventional, outside-the-box-thinking person who approaches things from different perspectives. As a writer, my motivation is to present varied points of view. Writing is a way of self-expression, a way to share thoughts and observations, and my stories will allow readers to explore with imagination. This encourages them to go beyond their immediate environments and horizons.” As a longtime fan of children’s books, her sentimental favorite is “The Jolly Postman,” a classic that she treasures to this day. Jill Criscuolo is realizing her dream in publishing I Want To, the introductory book for the planned series. Forever exploring avenues to move forward with a creative zeal, her venture into literary publishing starts another chapter in her media and entertainment endeavors.