How Hans Regained His Love 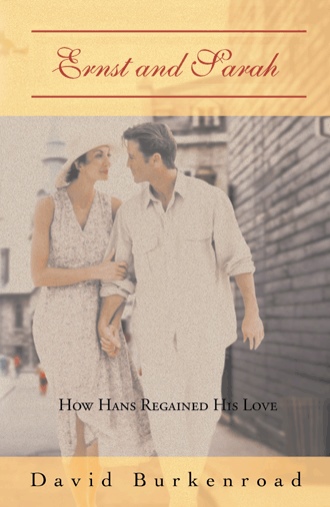 This is the story of Ernst Kroll, and some of his descendants. Ernst was a Jew born in 1880 in Berlin, Germany. His ancestors had lived in Berlin for centuries. The first Berlin Kroll came as a merchant from Hamburg who had come a few times to Berlin to buy furniture and grain. He came to like Berlin. AIt’s Jewish,” he said. AThey are involved and they get you involved. I like it.” There are a few much later years that meant something to Ernst. Although he had had carnal relations before then, 1905 was the year he bedded and Sarah agreed to marry him. For him that was a glorious step, to be so accepted,, even though he had persuaded her to get naked and join him in the bed. Thirteen years later in 1918, Hans sculpted Sarah. 1937 was when he was beaten by the Nazis. 1939 was the year he went underground to the Berlin slum, Bottom of the Barrel. In 1942 he was in Denmark briefly, and in 1943 Ermst killed a Nazi with ax in the south of France and he was hunted down and shot in the forehead. The young sharpshooter who killed him, Igor, after having investigated his whereabouts and tracking him down had formed an unwanted concern for Ernst, who was so old and yet so vicius. Of course, the sharpshooter was young and not married. His concern went as far as thinking of the dead man’s wife, of which he had heard when he was tracking down Ernst. But he, Ernst, whom people of the town were willing to talk about to the Nazis, was subject to the usual false accusations, that he was a drug addict, that he had two wives and two homes, one in West Berlin from where he came and the other in the Bottom after 1939. Ernst’s wife was admired for all the suffering she must be going through, dragged into the Bottom. In fact, Sarah trusted Ernst, even if he could see women in the Bottom. Ernst had told Sarah about Olga and Betsy, two women with whom he had relationships, but these were years before he knew her. When Ernst was shot in the forehead his legs had t crumpled immediately, with little suddenness, as his legs just failed. As soon as he had shot Ernst, Igor went to make sure that Ernst was a cadaver. He was. He removed the pig Ernst had carried out, going towards his wheelbarrow, which he enjoyed rolling through the center of Berlin to where he lived on the west side of the city. The young Nazi brought the pig back into the Abattoir. He did not like the dead body, so he covered it with a bloody sheet. One of the reasons he did not like dead people is that it reminded him of what he did for his country. Kill people. Track them down and then kill them as he had done as a hidden sharpshooter. Igor had just arrived at the office. He asked to use the telephone to talk to his contact on the ground. He called Marseilles Inn as if it were a business matter, which had been found out from the townspeople who were willing to talk about, who said that Ernst had talked to Nazis in the Inn and introduced his wife Sarah to them. People said Ernst went there not infrequently, and Sarah less frequently. She sometimes went alone and spoke to the Nazi officers. They of course they had seen him talking to Nazis. They assumed the worst things, but one of the times, soon before the assassination, Ernst invited him to eat meat at his place. He also at the Inn showed the officer (Schultz ??) the magical jacket they would tailor for him. What he was doing was inviting him to his death, although he did not find out who he was going to kill until the time he raised his ax high as he saw his face, which he recognized. Ernst did not know whether Schultz ?? recognized him. He was probably afraid of the hatchet. He did not move quickly enough to avoid the splintering of his cranium. The ax almost missed the brain, but it hit just and inch and a half from where the ears joined the head. The sharpshooter also heard that the officer Ernst had killed had been invited to eat meat at Ernst’s place. Igor asked to speak to the bartender Fritz. Igor said,

Hans falls in love with the voice of Sarah in 1905 in Berlin. She marries Hans’s best friend Ernst Kroll. Because he fell in love with Sarah, Hans does not marry. In 1939, Ernst and Sarah go underground to live in the slum of Berlin. In 1943, in the south of France, waiting for an Italian ship to take them to Lisbon, Ernst decides to kill a Nazi. Before doing the killing, he has a dream of a dybbuk, a lost soul, which persuades him to do the killing. Sarah decides to return to Berlin to find the only other man she knows. She finds Hans. They marry and go to Lisbon, and then New York and then Del Mar, where Sarah’s granddaughter Mary Ann lives. There she confesses that she had slept with Hans when he sculpted her naked in 1918. Hans dies. The epilogue concerns the great-grandson Jacob, who marries a woman named Carol, who kicked him out of her home three times. A year before Carol divorces Jacob, he sleeps with their maid, Mirasol. Mirasol has a child, but her husband divorces her because the child is half white. After Jacob’s divorce becomes final, she appears bringing her child to Jacob, and they marry.

I was born in 1949. I have a BA in English from UC Berkeley, a master’s in history from UC San Diego and a JD from UCLA School of Law. I have been an attorney since I passed the bar in 1983, but I was disbarred in 2011. I will reapply in 2016. I currently summarize books for my nephew, a businessman.