The Collection of Short Stories for Children and Young Adults 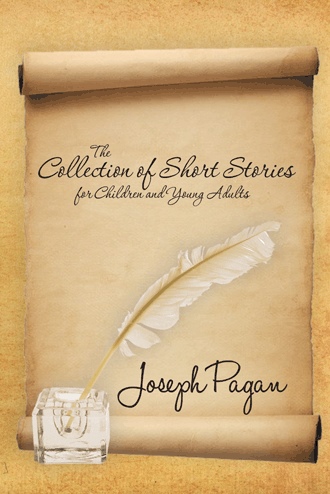 Eloise and the Enchanted Teapot Once upon a time there was a young girl named Eloise who lived at the edge of the woods. One day when she was walking through the woods she saw something shiny in the bushes. She walked over to see what was there. To her amazement, she saw a big brass pot. It looked like a teapot with a handle on one side and a spout on the other side. She picked it up and said, “What is this?” Then she noticed there was a spot on it and began rubbing it with her handkerchief. Now the pot began to rumble and shake! She got scared and dropped it. She just threw it away! As it shook a whiff of pink smoke came out of the spout. A little man about two feet tall appeared. Eloise shuddered and asked, “Who are you?” “I am the genie of the enchanted teapot.” He replied. “I have the come to grant you one wish, because you have freed from the imprisonment of the teapot.” She exclaimed, “One wish?” But Eloise did not know what her one wish should be. She thought and thought, suddenly she cried, “I know what my one wish should be!” “I want to be a princess in a big castle in a happy kingdom with a wonderful prince for my husband and five loving children.” The genie replied, “It is alright if that’s your wish, however, I must warn you, you will be tested!” In a sudden puff of blue smoke the genie was gone, the teapot was gone and all that was left were three frogs sitting on a rock. The first frog was very pretty. It was small and pink and kept saying, “Wardic! Feed me! Feed me! Wardic!” The next one was a big and ugly green toad. He was skinny and looked quite hungry. He was covered with bumps and warts. The toad kept croaking, “Wordic! Feed me! Feed me! Wordic!” The third frog was quite handsome and was beautiful shiny and black. He croaked and said, “I want food! I want food!” The black frog spied the little pink frog and gobbled it right down! Then he jumped around saying, “I want food! I want food!” At the same time the ugly green toad was say, “Feed me! Feed me please!” Eloise, seeing the frogs jumping around and eating each other was beside herself. She said, “What am I supposed to do?” Just then the genie reappeared. “You must kiss one of these frogs in order to get your wish. If you kiss the right one you will find your prince and live in a happy kingdom. However, if you kiss the wrong one you will become a princess but you will be locked in a dark tower. You will be chained to a wall and have nothing to eat but cold brown gruel. You will be fed by an old hag and your prince will be chained up in the other tower. All he will have to eat is cold mush. You will never be able to see each other as long as you live! Then as quickly as the genie had appeared, he was gone. Eloise was bewildered but serious. She looked around trying to decide which frog to kiss. First she saw the black frog. He was truly a handsome frog and he was saying, “Kiss me! Kiss me, sweetheart!” She remembered he ate the little pink frog and was unhappy with him. Then she looked at the old green toad. He was truly an undesirable frog with all his bumps and warts. The old toad croaked, “Feed me! Feed me please!” So she asked the old toad what he wanted to eat. “Bacon and eggs,” was the reply. Eloise didn’t know what to do, but finally decided to go home and fix a big skillet of bacon and eggs. When she presented it to the old toad, the black frog gobbled it right down. He was as fast as lightning. She sighed, and then gathered a bushel of corn for the old toad. But the black frog finished this off before the old toad even saw it! Eloise was worn out and she said to the black frog, “The more I try to help that poor old toad, the more you make his life miserable. Just because of that, I am going to kiss the old toad!” And she did! All of a sudden there was snow on the ground and it was snowing in the woods. Out of the snow came this handsome young prince. He was riding a white horse and trailing another white horse behind him. He kissed Eloise and said, “My name is Prince Rupert of Kittya. I have seen you and I think you are beautiful. I love you and want to marry you! I want to take you with me to my kingdom!” They kissed again, and then rode off to the castle in Kittya. There they were married and raised five royal children. They all lived happily ever after.

I originally began creating children’s stories when I was a child myself. After I had grown up and was on a camping trip with three young children, they asked me to tell them a story. That gave rise to this book. The first five stories in this collection were written for children and with the interaction and help of children. The children suggested characters, places, and other elements that added to the completion of these stories. It is my hope that a lot of sleepyheads will enjoy them. The other six stories were written later. They are targeted for young adults and are, for the most part, adaptations of my unpublished screenplays. These I wrote while studying filmmaking in college. All the stories in this book were meant to be enjoyed and, maybe, give the readers a chuckle or two, some fun and exciting reading!

Joseph Pagan is the seventh of twelve surviving children. He was born in San Diego and graduated from El Cajon Valley High School in 1973. In 1974, he moved to St. Louis and studied business and art history. In 1977, he moved to Hollywood, California, and studied songwriting and film writing. In 1980, he moved back to San Diego and studied business and writing theory. In 1993, he received an AA general degree from Grossmont College. He studied filmmaking, film writing, art and art history at San Diego State University for three additional years. In 2012, he published his first book, The Treasury of American Folk Poetry and also Joe’s Love Songs an album of his original songs featuring B.M.P.