Who Am I? My Story and Philosophies

The Autobiography of a Somebody or Nobody or Anybody? 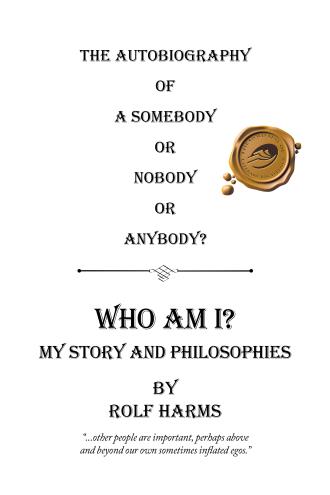 This autobiography of the author, Rolf Harms, is a collection of some of the many experiences and events that have made his life so interesting. Along the way, the difficulties and opportunities he has encountered have served to enrich and stimulate his activities and his thinking on just about every challenge he has met. As a result, he has developed philosophical views and opinions, which, as seen by others, may label him as an eccentric or perhaps a uniquely different personality. In any case, he writes in his chapter titled “Who Am I?” that “the fact is we are mentally different, unique, because everything, which has influenced us in our lives, has been unique and different from others.” He summarizes his philosophical thoughts, stating, “I am, in part, at any one point in time, the sum of the total experiences in my life, added to that which God endowed me with from the beginning, and including the conscious choices I have made to further mold or change my being.” The various chapters in this book provide the reader a powerful insight to the author’s journey in life. For starters, we learn about his childhood in postwar Germany. We hear of the typical German requirement for discipline and the impact it had on his development as he grew up. The incredible strength and character of the author’s mother had a major impact on his upbringing and in his belief of a value system, which has continued to influence him throughout his life. The wartime experiences of this incredible woman are described with love and compassion. Leaving home and country at a mere fifteen years of age is followed by years at sea in the merchant marines. The youthful impressions gained on his travels around the world are seen in related chapters. Then when the author actually jumps ship and becomes an illegal alien, trying to make his way in the United States, a new beginning ensues. The author’s account of his career with the American Express company makes for compelling reading. We follow his inspirational career as he advances through the ranks from the clerical entry-level job to his eventual VP position. Advancement opportunities came as a result of his relentless efforts to be the best he could be and to succeed in everything his work required of him. The related chapters in this book are as varied and diverse as the evolution of the credit card industry itself. The author’s creativity and thorough understanding and knowledge that he acquired in his work provided the opportunity for him to develop, set up, and run the Latin America card operation. In the chapter titled “My Corporate Career at AMEX,” it reads, “As I overheard the discussions about these problems, I made some offhanded remark about us not having learned anything from past experiences. The EVP asked me to clarify my remarks, etc. I was directed to put a proposal on paper for a discussion the next day. Later that next day, I enthusiastically presented my potential plans for the rollout of the Latin America card operations center. I did not realize it just then, but as it turns out, I had, in effect, written the job description for my next promotion and assignment. Two days after my presentation, I was promoted and charged with the assignment and the responsibility to implement my recommendations forthwith.” Later as the author writes about the discovery by criminals that fraud involving credit cards can be a very lucrative business for the criminals of this world, in the chapter “Enter the Thieves,” the author provides a detailed in-depth account of how he and his team dealt with a fraudulent “altered card” outbreak and how they, in fact, thwarted this “Miami altered card scam,” he said, “Beginning to end, from the time I received the call in Mexico to the time we started to actually stop the payments, we had already paid out in the hundreds of thousands in dollars for fraudulent charges, all within a period of about six weeks; however, in the three to four weeks that followed, we could have lost in the millions of dollars if we had not had the special task force review station in place. The lessons learned from the Miami altered card scam have proven to be helpful to fraud prevention efforts around the globe.” In other chapters, he gives accounts of assignments to give fraud prevention seminars to foreign government agencies, including the renowned Russian KGB, and other countries law enforcement organizations. The author states that his work involving “fraud prevention” became a passion for him. Eventually, he was transferred to the Europe, Middle East, and Africa region, where he successfully spent the last ten-plus years of his AMEX career. While in Mexico, the author talks about business relocation of offices and also gives an account of a ghost-hunting expedition. The author’s first marriage ended in divorce. But in the chapter titled “The Love of My Life,” he gives a moving account of how he ended up finding the love and happiness that he thought had eluded him. But the book covers so much more. There are chapters that may make the reader laugh and some that makes the reader cry. For the author, one of the most difficult personal experiences is detailed in the chapter titled “The Lightning Bolt,” which addresses the true story about the author’s father, a truth he learned about when he was already in his fifties. In the chapter “What Is a Caregiver?” the author tells the story about his father-in-law, a person whom he said “I loved and respected that man more than any other I ever was close to in my life.” To sum it up, Who Am I? is a compelling autobiography of a somebody or nobody or anybody. You decide . . .

This autobiography offers a compelling insight into the struggles and achievements experienced by this farm boy in postwar Germany. He leaves home at fifteen to seek his fortune in the unknown future. We experience his exhilarating arrival in New York City as a young teenager on his own. We follow his years at sea and share in his becoming an illegal alien hiding out in plain sight in Brooklyn, New York. The story follows an incredible career in the corporate world, where he amassed an impressive knowledge of the credit card business as it develops to a multibillion-dollar industry that left an indelible impact on society. Rolf’s contributions to the American Express credit card expansion is reflected in the impressive promotional opportunities achieved. The book summarizes his career and highlights his passion to fight fraud on credit cards and provides an interesting insight into this field of work. Following a corporate career at AMEX, the author becomes a realtor and opens his own office. His views on real estate following the 9/11 era makes for an interesting commentary on our time. Finally, we explore the philosophical views this author has developed during his journey. His ideas on who we are or have become is reflected in the book’s title—Who Am I?

This author, Rolf Harms, is a unique, perhaps somewhat eccentric, individual. He suggests that we are the product of accumulated experiences in our lifetime, and therefore, we are different. Born in Germany during World War II, he dreamed about exploring the world, and at fifteen, he became a seafaring youngster traveling the oceans of the world in pursuit of that dream. At nineteen, he jumped ship in the United States and became an illegal alien. This was an exciting time, yet he realized that his future as an illegal alien would not be secure. His career at the American Express company became a major part of his life and future. He was recognized for his abilities and advanced, over time, to a VP level. His expertise in risk management and fraud prevention allowed him to give seminars to foreign government agencies, including the renowned KGB in the Soviet Union and others. After twenty-seven years at AMEX and his return from overseas assignments, he opened his own real estate company. His lifelong quest for achievement once again took on a new direction. It is the author’s philosophy and belief that we are destined to contribute to society. In his own humble way, he feels that his autobiography and philosophical views support that goal.