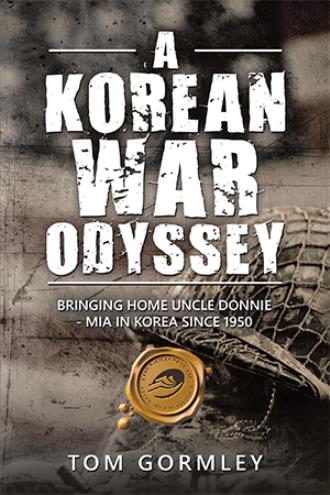 The picture of the young soldier with the ears sticking out graced my mother-in-law’s kitchen forever. When asked, she would reply that her younger brother Donnie disappeared during the Korean War at the tender age of eighteen. In 2010, my wife, Sandy, and I set out to discover what happened to Corporal Donald Matney and to bring him home. Our journey took us to Washington, DC; Seoul, Korea; and many places in between. But slowly, carefully, step-by-step, we reconstructed the short life of Sandy’s uncle Donnie, identified his remains, and returned him to rest by his mother’s side in Missouri. A Korean War Odyssey is this story. The saga begins with a Korean history lesson told through the eyes of a fictional young refugee family fleeing the North Korean invasion. It continues from the viewpoint of a soldier on occupation duty in Japan suddenly thrust into a violent “police action”. Both witness the atrocities of war until one disappears. Through alternating perspectives, the account continues weaving what happened during the war with how we identified this missing young soldier and brought him home. A Korean War Odyssey provides much needed insight for today’s headlines. Those with friends and relatives lost during the Forgotten War will learn what may have happened. Anyone who desires to understand the Korean War and why the US still has a presence on this Asian peninsula today will gain a new viewpoint.

A native of Ohio, Tom Gormley graduated Ohio State University with a degree in Engineering and Colorado State University with a Master’s in Business Administration. With over forty years business experience in high tech industries, Tom is now writing. An avid history buff, his first story tells of locating his wife’s uncle, Cpl. Donald Matney, long lost during the Korean War. Tom and his wife, Sandy, call Colorado their home. They love to travel.