The Value of Your Idea$

Make Intellectual Property Work For You 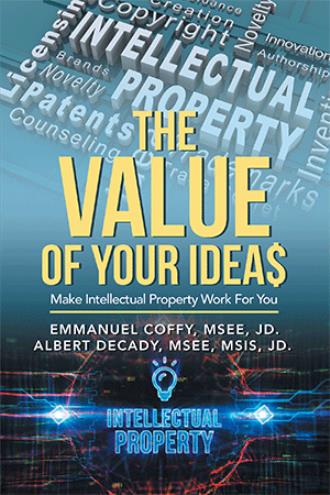 As the title suggests, the book is about Intellectual Property (IP), its ideation and creation, its implementation/materialization, its protection, its expoitation/commercialization and its valuation.

Emmanuel Coffy is an Immigration Attorney, registered Patent Attorney and former Patent Examiner. www.coffylaw.com Mr. Coffy is an inventor and had a long career as a Digital Design Engineer. During his career as an Engineer, he held positions such as Lead Design Engineer. He supervised the U.S. Air Force’s largest network (Cape Canaveral – NASA) capable of supporting two (2) simultaneous launches. His practice emphasizes patent application preparation, prosecution, and enforcement in the electronic arts, including Business Methods Patents and Design Patents. Mr. Coffy has extensive experience in digital technologies, computer networks, and information technologies as well as device physics, which includes semiconductor applications. Mr. Coffy co-invented a device called the “Low Friction Apparatus” issued as U.S. Patent No. 8,585,092. He also has experience in re-examination, litigation support, patent infringement assessment, patentability opinion letters, cease-and-desist letters, demand letters and due diligence. Mr. Coffy also advises clients on intellectual property strategy, licensing, trademark, trade secret, copyright and related unfair competition/deceptive advertising issues. ALBERT DECADY-An attorney and engineer by trade, Decady is a seasoned senior official in the U.S. Patent and Trademark Office with over twenty-seven years of experience in the field of intellectual property. He is currently a Supervisory Patent Examiner at the United State. Decady regularly serves as a media commentator and has lectured at the University of Maryland, College Park. He is the Founder of the Haitian-American Lawyers Facebook group. He is also the Founder and co-host of the IP Breakfast podcast. He was the Founder and Chairman of the Haitian-American Intellectual Property Association. His academic credentials are extensive. Decady earned Bachelor and Master degrees in Electrical Engineering from the City College of New York, a Master of Science in Information Systems Management from George Washington University, and a Juris Doctor from the Washington College of Law American University. He is currently enrolled at Harvard Kennedy School Public Leadership Credential, Harvard University. Additionally, he is an active member of the Maryland Bar Associations. Decady resides in Maryland with his wife and three children.