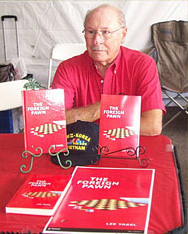 Lee Yagel, Trafford-published author of the Cold War–period novel The Foreign Pawn, spent twenty-four years in the Army Air Corps, AAF, and USAF. He served in World War II, as well as the Korean and Vietnam War. During his career, he was based in the South Pacific, South America, and Europe and in countries like the Philippines, Guam, Japan, Korea, Vietnam, and Thailand.

After his military service, he became a licensed real estate broker and owned two real estate offices for twenty years. He and his wife now live in Surprise, Arizona (W Phoenix) near Luke AFB.

The film rights for The Foreign Pawn were optioned by Anarchy Management screenwriter Zachary Zerries on September 14, 2012.

“The Foreign Pawn caught my attention right away,” said Anarchy Management’s Film/TV Literary Manager Sammy Montana, “because it fits perfectly within my client's portfolio of projects known for their rich story lines and compelling characters. I shared it with screenwriter Zach Zerries and he was immediately onboard.”

The author explains how Anarchy Management came to option The Foreign Pawn. “I decided to participate in the Trafford Hollywood Book to Screen program as an extended marketing tool, and a number of months later, I was contacted by Mr. Marcus Chait of Author Solutions who told me that Anarchy Management wanted to talk with me. He put me in contact with Sammy Montana at Anarchy and a screenwriter who was anxious to produce an adaptation of The Foreign Pawn for a possible movie production.

“I was quite surprised because the screenwriter had read the book twice and was so enthusiastic about writing the screenplay as soon as possible, and of course, I was delighted my book had been chosen and was eager to proceed.”

When asked if he thought the optioning of The Foreign Pawn would affect future sales of the book, Mr. Yagel said, “Of course. It has to. I believe most people who know a movie is about to be made from a book will want to read it because it must be good if it merits a movie, and many want to compare the book to the movie version.”

We asked Mr. Yagel which famous Hollywood actors he would like to see play the protagonists in the movie version of The Foreign Pawn, and he said, “Someone like Brad Pitt, of course. His talent in the espionage field is well documented . . .”

When asked if his travels and time in the military helped him make The Foreign Pawn more realistic, he replied, “Yes, very much so. During the Cold War, I was a supervisor in a top-secret underground USAF Combat Control Center in Japan 1957-1961, monitoring the RB-29s, RB47s, SR-71s, U-2s we sent on Photographic Missions (PARPRO) over Russia to determine where they were hiding atomic bombs, their nuclear hardware, and aircraft capable of reaching the US.

“Ambarchik (noted in my novel), located at the northwestern tip of Russia, was their main hidden airfield and nuclear storage facility. Quite a number of our RB-29s were shot down by Mig-21s or shot so badly they ditched in the Sea of Japan and were listed as ‘training missions, mechanical failure.’ We often scrambled F-86 Sabre Jets to fight off the Migs chasing our returning RB-29s. All of this was hush-hush, top secret—tantamount to war if either nation admitted it—until the 1985 Freedom of Information Act was passed and all of this was revealed. I lost some good buddies back then.

“In addition to the above, the MIA/POW issues caused me to write the book, and those topics were ‘hot’ and a blotch on America’s non-effort to recover them. It helped promote the book.”

A Sneak Peak at his next Trafford Book

We asked Mr. Yagel for a sneak preview of his next book. “The Tainted Chrysanthemum is a 98,000-word novel I just finished, and I am ‘fishing’ for representation. I spent twelve years in Japan. This novel is about a new weapon explosion that triggers an earthquake and a tsunami, a CIA agent falling in love, and a notorious man who believes his ancestor should have been the emperor. He now wants the Chrysanthemum Throne.”

His Advice to Potential Trafford-Published Authors

When asked what advice he would give to aspiring Trafford authors when considering self-publishing their work, he said, “Have a good premise and strong protagonist. Polish them and let them tell the story and rewrite, rewrite and rewrite. Work like mad on whatever you are writing about and go easy on using adjectives. Take a breather. Do nothing for weeks or longer. Then, go back to it and you’ll be surprised by what you will change, add, and polish. Finish a novel, forget about it for a month or two. Then go back and read it. You will really be surprised by the changes you will make. But be careful, there is a thing called ‘editing overkill’. And lastly—do not give up.”

“We are thrilled that our Book-to-Screen services helped introduce author Lee Yagel to Anarchy Management,” said Keith Ogorek, senior vice president of marketing for Author Solutions, the parent company of Trafford. “We created these services to give self-published authors a better shot of getting their books considered for development as a movie or TV show.”