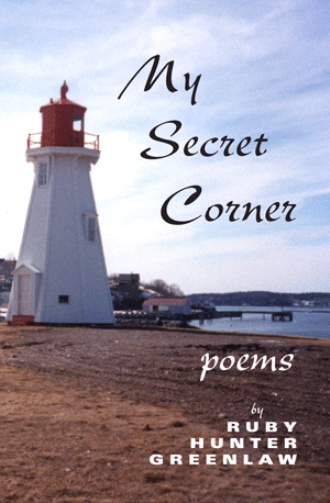 A Note from Ruby's co-publisher:

I greatly enjoyed preparing the poems for this book and I know they will be enjoyed by any who read them. There is something here for everyone. Ruby has heard from many of her readers over the years, many of them strangers who had to tell her what her poems have meant to them. Many of them were ill or going through an illness with a loved one and found 'solace', the word they often used, in reading her words, many poems dealing with death, dying, and cancer. Often she has been told her first edition of 'My Secret Corner' is always kept by the bedside and worn out from constant use.

Some of her poems are lighthearted, some are whimsical, some of them are astute comments on today's society and governments and ring loudly of truth. Some of them tell of her feelings or the feelings of others while going through the death of a loved one. Some tell of her childhood in an island fishing community, remembering everything from carrying pails as a youngster to fill the bath tubs and outdoor 'biffies', the local name for the outdoor 'facilities'. There are love poems and poems of life-long friendships that end with a separation by death. Many of the poems in this edition are new, never published before. Many of them are award winning. All are enjoyable and entertaining. I'm sure any reader will find this book a good read, a book that will be kept nearby to be read again and again.

Born on Grand Manan Island in the Bay of Fundy off the coast of New Brunswick, Canada, and Main, USA, Ruby Hunter Greenlaw is an award winning poet and a distinguished member of the National Society of Poets. Ruby has also won several Editor's Choice Awards for her poetry. This is the second edition of My Secret Corner, with never-before-published poetry added.

She was married a day after her 18th birthday, in the bedroom of her cancer-stricken mother. Dying only five weeks after the wedding, her mother had told her she could die in peace knowing Ruby was married and could give a home to her three younger sisters. She and new husband, Danish born Fred Hunter, made a home for her three sisters, ages 11, 14, and 16, and then had five children of their own. Ruby was widowed at a young age when a teen-age driver hit her husband while he was on a walk. Ruby worked at several jobs to support her family, including private nursing and a restaurant cook. She moved to the St. Stephen area and eventually met Eston Greenlaw, just out of the US Air Force, and they married in 1961. He cared for her five as if they were his own and they had a son together. They are retired and living in St. Stephen.

Though Dyslexic, Ruby had never allowed it to interfere with her writing or whatever she wanted to do in her life. She is also an avid painter with scenes from her childhood island home a favorite theme. Ruby is a cancer survivor who uses her optimism and faith to help others and continued to write both poetry and short stories during her illnesses. She recently lost a son and used her writing as an outlet for her grief, composing a poem about her feelings during that time. Ruby has been a great inspiration to others both through her friendships and her poetry.