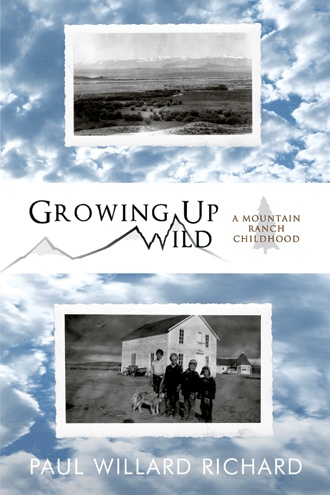 Prior to sunrise the river was pure, peaceful, and new. Steam in a waist-high cloud rose above it, showing that its water was warmer than the hovering air. The rippling of the stream sent reassuring messages to me and my dog. As I scurried along in the frosty pre-dawn light, excitement welled up in me. My sacred river was untouched and pristine. The ice was frozen in the back eddies and outward from the shore in uneven toothed plates, and broken only by the slow moving black water slipping by in dank silence. Black tangled and twisted willows lined the creek shores. I had entered a golden era of childhood when we exchanged our prairie ranch for one in the towering Rocky Mountains of Colorado. Two willowed rivers rich in trout ran through our new place. Lush hay meadows spread on each side of our house, a slow train snaked across the Two-Bar, and a small town of 500 souls bordered our ranch to the south. Opportunities abounded for a thirteen-year-old boy. Moving along the river, I felt kin to a Ute brave. I absorbed all the sounds and scenes as Smokey, my dog, explored with me. As the welcome sun brightened the sky above the mountains, magpies squawked in many voices, gadwall quacks echoed up the river, and crow calls could be heard far across the damp meadows. Five times in the early day mist the river bottom resounded with the thumping hollow jug sounds of a bittern's mournful voice somewhere far down the river. That morning I saw a mule deer in the meadow, black crows on the wing, a sneaking badger on a nearby ridge, and a lone red fox. In the early dawn, I loved to move in close before these wary animals bolted or flew. What to expect on such mornings was as difficult to know as was the future. The thrill was in the surprise of what was around the next river bend. When I was alone in these wilds of our meadows with Smokey, I felt unequaled. I was born under the water sign of the Pisces fish, feeling strong in the wilds with the rivers and Smokey at my side. Because I was also small for my age, this confidence seemed to collapse when I was with people. Not knowing about my life, my future seemed more of a threat than a thrill. I questioned who I was, how I fit in, and what I was going to become. I worried about making a living someday for I knew full well that there wasn’t room on our Two-Bar for five ranching sons, and I had two older bigger brothers. - - - - - - - - - Once I got a little age on me, I’d saddle up and ride the Two-Bar as I pleased. In the pasture or mixed in with the milk cows, there were always several horses I could use. Still, my favorite was Blackie. I recall one day setting off on Blackie with Smokey at her hooves. We rode down among the grazing workhorses in the lower pasture. Blue iris clumps surrounded the herd on the soft verdant meadow under the clear blue Colorado sky. Slowly I worked Blackie into the midst of them, naming each of the sixty heavy bodied horses, trying to remember how we partnered them for haying. I knew each one, having harnessed, petted, and brushed them. I loved them for the wild and free creatures they were until haying time tamed them into working horses. Riding on north to the sandstone bluffs, I brought my horse to a stop and peered into high up caves that were unreachable on foot, looking for owl nests. Then I rode right up the Illinois River channel for a quarter mile, spotting fish and wild things. The water soaked my feet and often reached Blackie’s shoulders as I ducked the overhanging willow branches. I worked my mare out of the river and up the rock strewn west bluff and admired the ranch, viewing it all from high in the saddle. I could feel the puffing in and out of Blackie’s sides from the strain of her steep climb. On the descent, I spotted a doe and fawn along the Michigan River who melted into the trees after seeing my dog wander by. Smokey kept me in sight, but wandered on his own seeking and probing his domain. My dog was as bold as I was in our explorations. We hugged the willows bordering the river for a half-mile looking for the deer again. I spotted a big hawk lift off from its nest. The tree was branchless for ten feet or so. I snubbed Blackie to a tree and stood on her back to reach the lower branches. In the flat stick nest, as the parent watched from a tall alder tree across the rippling river, I found four warm eggs. Riding on we came to one of my favorite small openings. Ducking willows and dismounting, there on the riverbank surrounded by dense green trees, I sat holding Blackie’s reins with Smokey resting at my side. We counted trout rise to the surface thirty times and saw seven diving ducks catching fish. I chewed on sweet ends of timothy stems and daydreamed as Blackie chomped meadow grass behind us. Going home on the two-path dirt road, I opened up my beautiful mare to run as fast as she wanted. Wind blasted my face and tears came to my eyes as I flew free up the road with sagebrush and meadow flying by on each side. Smokey was far behind when I reined in Blackie. She pranced around and soon settled down as I walked her on up the ridge to the barn and unsaddled. I gave my trim black mare a bucket of oats and tenderly brushed her sleek sides and mane, feeling as if I was a fairly decent rider, but nothing like my dad.

The author tells of his growing up in the spectacular mountains of Colorado on the Two-Bar Ranch. Life there provides the backdrop for the funny, wild, and sometimes heart wrenching events he and his brothers come upon. They encounter right and wrong, life and death on the ranch.

Many people wish they could have lived an exciting childhood with great parents, a wonderful dog, many siblings, and vast freedom in beautiful high mountains. This adventurous boy has all of these and much more.

Doing the fun and ornery, his home ranch was the site of stopping the local train, raiding trespassing fishermen, catching skunks by the tails, teaching magpies to talk, and fishing for wily trout in unusual ways.

This 1950s story is also about wild pets, hand fishing, livestock defending, weird hired hands, and feuding with a stubborn neighbor. Having lived wild, free, and independent, this kid eventually has to deal with the dreaded sale of his home ranch. Can he let go or save the ranch he truly loves?

Funny, insightful, and poignant, this story captures a marvelous growing up. Based on the author’s own life, this memoir provides insights about living an authentic and exciting ranch life.

Paul Willard Richard, biology professor and published author, weaves his true story of an exciting Colorado mountain ranch life, growing up free and ornery with four brothers and a courageous dog. His wild and amazing adventures are what most people would love to have experienced as a kid. The great-grandson, grandson, and son of North Park ranch people, Paul Willard Richard was raised in the days of working ranchers. He grew up wild and free at 8,100 feet elevation on the Two-Bar Ranch on the northwest edge of Walden, Colorado. His love of the ranch’s rivers and outdoor life led him to eventually become a professor of biological science at the University of Northern Colorado in Greeley, Colorado. He taught junior high, high school, university, and adult students for thirty-two years. His heart has always been in the North Park he writes about. As a professor emeritus of the biological sciences from UNC, he lives and writes in Greeley, Colorado.